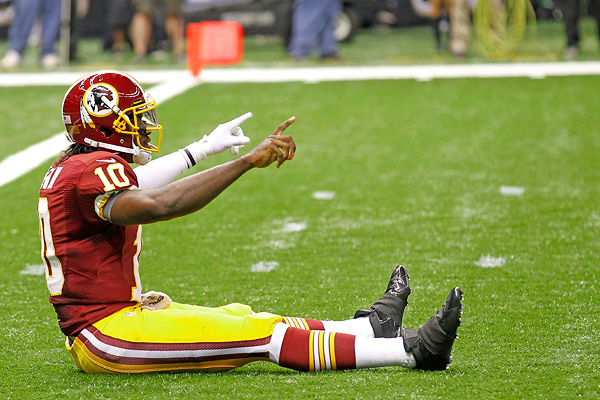 Griffin dominated college football for 3 1/2 years in which he won the Heisman in his senior year. A lot happened before RG3 became a Washington Redskin.  First, there was the debate between whether Luck or RG3 should be the #1 pick. I feel if RG3 was drafted by the Colts, he’d be a completely different player because of the offensive playbook the Colts run. Washington traded away 3 first round picks and a 2nd round pick for RG3. I personally was excited about the move but as I look back I found it difficult in theory to trade so many draft picks for RG3 even with his great rookie year. They already had salary cap issues so by trading position fill picks that don’t hurt the cap as much could be consider an inconvenience. RG3 had an outstanding rookie year with an touchdown to interception ratio of 4:1. He helped Washington win the division and won himself Rookie MVP. In the playoffs they played the Seattle Seahawks at home on a horrific grass field. RG3 was already coming in injured but was obviously hurting more than he lead on.

In the forth quarter, his knee collapsed along with the hope of winning. He required surgery which was performed by the renowned Dr. Andrews. His plan was, “all in” for week 1. A lot of scrutiny surrounded RG3 and Washington Head Coach Mike Shanahan,but they created a plan to protective RG3 in the future. He didn’t play in the preseason which people questioned. He looked very shaky through the first 3 weeks and managed to lead them in a victory over the Oakland Raiders. Adrian Peterson came off his ACL surgery and almost broke the single season record for rushing, because of that I feel the bar was set extremely high. RG3 set the bar high with his amazing rookie year, but I feel once the bar is that high anything else will be a disappointment. He succeeded with the read option because the NFL hasn’t seen that much, but in the 2nd year and with the rule change of the QB turning into a RB the defenses can scheme better.

They say it should take a full year to recover from that type of injury. I expect RG3 to be back to 100% next year because when watching him you still see that hesitation, not following through on passes which results in turnovers. The Redskins need to go on a run if they want a chance at the playoffs and that’s what RG3 cares about. The injury to him has become a distraction to the team. Without RG3 I think Washington would have to change the offensive scheme, not to take  away from cousins he’s a great backup. The debate of Manning and Brady has started to turn into the debate of Luck and Griffin as Brady and Manning paved a way for a new generation of QB’s.