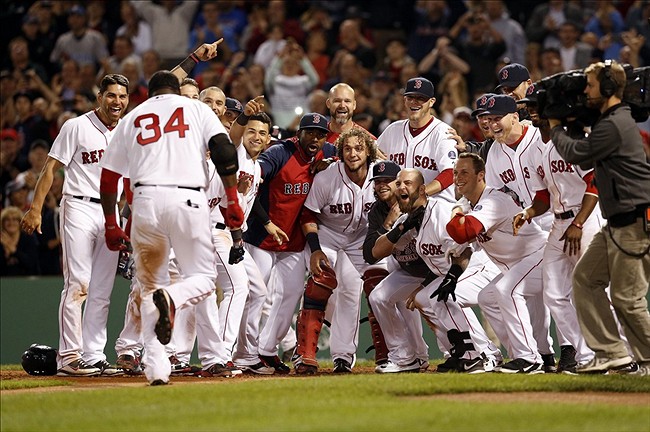 The previous two were won on the road, which makes this one a little bit sweeter because they clinched it at Fenway Park for the first time since 1918.

This Red Sox team is coming off a season last year in which they finished last in the AL East, fired their manager, and traded nearly half their payroll.  They had hit rock bottom, right?

Wrong.  When I look at this team I see a bunch of scrappers, a bunch of gamers.  Guys that know how to play the game and play if hard.  I also see an experienced bunch.  Dustin Pedroia, David Ortiz, and Shane Victorino among many others have World Series experience.

There aren’t a lot of big time names on this roster.  They won this title with a bullpen that most casual baseball fans don’t know.  Junichi Tazawa and Koji Uehara were the two biggest contributors of the bunch and they were magnificent, but who had ever even heard of these guys.

That, in my mind, is the most impressive part about all of this.  Well, that, and the beards.  Not only is this team tough, but they look tough too.

David Ortiz won World Series MVP after an unbelievable performance over the six games.  “Papi” batted .688 in the series and forced the Cardinals to walk him three times in Game 6 with two being intentional.  The .688 batting average is the second highest in postseason history.

Either way you want to look at it, if you watched the game, you witnessed history.  Whether it was Ortiz’s batting performance or the fact that a World Series was finally won at Fenway Park over the last 95 years, it truly was a special night in baseball.