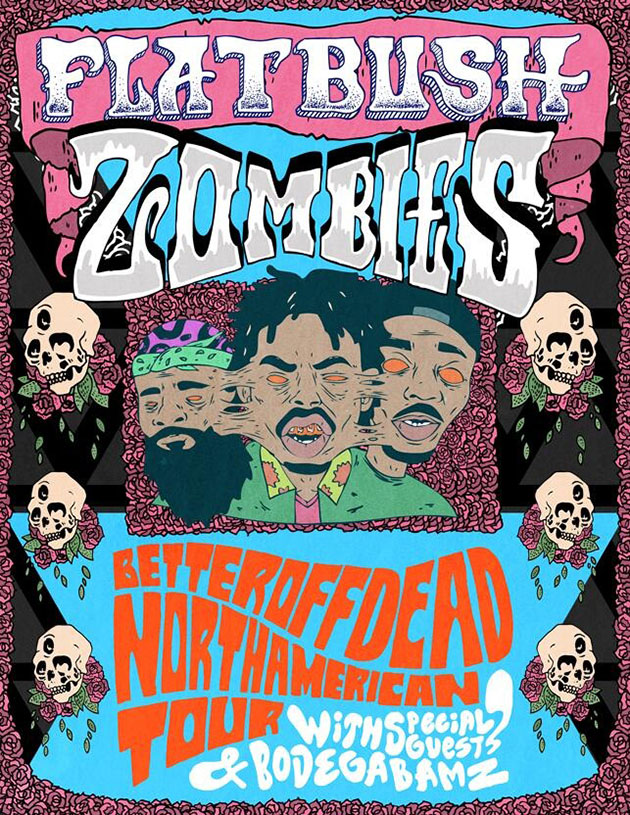 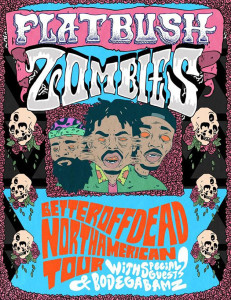 In promotion of their new mixtape BetterOffDEAD, the Flatbush Zombies rocked an energetic Blue Moose on Friday. In their first headlining tour the Zombies have pieced together an incredibly versatile and crowd pleasing set list.

Since releasing their second project, BetterOffDEAD, on September 11, they have performed at North Coast Music Festival and Rock The Bells before kicking off their “Better Off Dead North American Tour” in early October. The group, consisting of rappers Meechy Darko, Zombie Juice and producer/rapper Erick “Arc” Elliot, is known for putting on wildly electrifying and passion-filled shows. Their Brooklyn based hip hop and psychedelic influences fuse together to create a genre all on it’s own. The intimate atmosphere of the Blue Moose helped to create a mosh-pit filled, rage fest of a performance.

The Des Moines based duo Daggers & Gadema were the first act of the night. They started off rocky when the sound system faulted, however the poised Emcees took to their roots and spit a cappella freestyles, recieving “oohs” and “aahs” from the crowd. After the equipment was fixed, their upbeat tracks from their recently released EP The Reclaimers permeated through the crowd. This duo has a lot of talent and showed it Friday night.

The second act to hit the stage was Spanish Harlem native Bodega Bamz. Already collaborating with rappers like ASAP Rocky and the headlining Flatbush Zombies, “Papi” as he prefers, has made a name for himself in the hip hop world.

The Flatbush Zombies came on soon after. The horror influenced beat dropped as Juice crept onto the stage to the chants of eager fans. After a completely solo performance of Minephuck, LS Darko and Erick “Arc” Elliot flew onto stage, swiftly cutting through high energy tracks. The Zombies stage presence is extraordinary. They connect with the crowd and know how to create an electric atmosphere. With their lyrics ranging from playful drug anthems to serious and enigmatic ballads, they clearly take lyricism to a whole new level. You can easily see that they have one mission when on stage: Have fun. It’s hard to appreciate the intensity of the Zombies if you have never seen them live.

After rocking the mic for almost 45 minutes, the Zombies too were plagued with technical difficulties. Instead of walking out on their dedicated fans, Darko assured the rowdy mob that the show would go on. Making his way to the center of the crowd, LS Darko began the song “Thug Waffle” as raucous ensued. The Emcee’s a cappella bars, echoed by the mosh-pit, brought the house down. After a quick fix to the sound system the Zombies closed the night with the intro track to BetterOffDEAD “Amerikkan Pie.” The Zombies left the crowd eager for more and a message of open mindedness. Even with technical difficulties the Flatbush Zombies put on an incredibly performance, fueled by the energy of Iowa City. If you haven’t heard the Zombies check out their Facebook page.