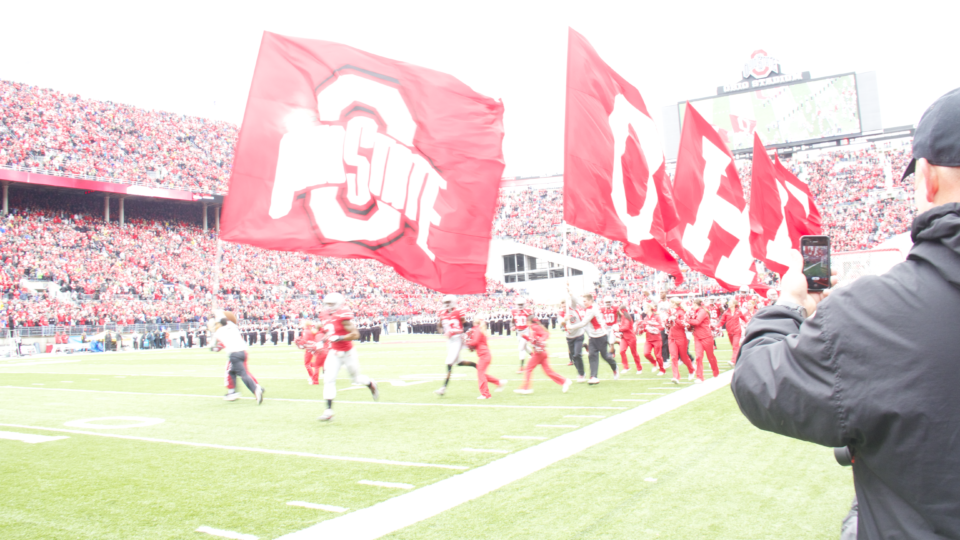 Although there were a number of upsets across college football on Saturday, the Hawkeyes were unable to add their name to that list.

After a nearly perfect first half, the Hawkeyes failed to stop #4 Ohio State; losing 34-24.

“You don’t get prizes for playing a good first half,” said Kirk Ferentz. “You have to play the full 60 minutes. I think we realize it’s a matter of what do we have to do to be in a better situation the next time we get this chance.”

Iowa took a 17-10 lead into halftime only to see Ohio State tie the game up on the very first drive of the second half. It would not be until half-way through the third quarter that the Buckeyes would get their first lead of the game.

Despite being outplayed to start the second half, the Hawkeyes refused to go quietly. On the ensuing drive, Jake Rudock found sophomore tight end Jake Duzey, who took it 85 yards for the touchdown to even the score at 24.

The score would remain even entering the fourth quarter until Braxton Miller, Carlos Hyde and the rest of the Ohio State offense marched down the field – 75 yards – for a touchdown to re-gain the lead for good. Carlos Hyde ran the ball in for the score, breaking three tackles in the process. After a failed Iowa drive, the Buckeyes would extend the lead on Drew Basil’s 25-yard field goal.

“Braxton is a really good athlete and good quarterback back there,” Ferentz said. “He’s a unique player; he can throw the football and is an outstanding runner. There were times where it looked like we had him under control and contained, but he maneuvered and to his credit, made some good plays.”

After being held to just 23 yards on the ground two weeks ago by Michigan State, the Hawkeyes were able to re-establish the ground game running the ball 27 times for 130 yards – the most given up by the Buckeyes this season. Mark Weisman and Damon Bullock split the work load both getting the ball 10 times with Bullock rushing for 56 yards and Weisman for 52.

The Hawkeyes (4-3, 1-2) will return home next Saturday to face Northwestern (4-3, 0-3) who has yet to win in the Big Ten Conference this season after losing to Minnesota on Saturday. “We have a great series with them and have a great competitive series back-and-forth,” said Ferentz, “There is nothing easy in conference play. The guys focused and prepared well this week, and it’s going to have to be the same next week and for the next five opponents.”