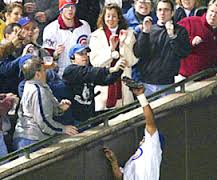 On October 14, 2003 is a day that will live in infamy for not only the Chicago Cubs organization, but for the city of Chicago as a whole. It was on this date that we were introduced to a man that would change the organization forever. That man’s name: Steve Bartman.

Just 10 years ago Steve Bartman was a normal man who had the great fortune of obtaining a seat down the left field line to the Chicago Cubs National League Championship Series game versus the then Florida Marlins. This would be a dream come true for any Cubs fan as it appeared as though the team was headed for the World Series.

However, Bartman soon become the most wanted man in the city when he reached forward to snag a foul ball away from the Chicago Cubs’ left fielder Moises Alou. In doing so, he denied Alou the opportunity to get an out at a crucial point in the game.

It was in this moment that Steve Bartman went from a casual fan to an outcast. He was instantly rejected by all Cubs fans, and since this incident, his life has never been the same. Normal is something that this man will never know again.

In addition to these measures taken by most Cubs fans, they have also become active in trying to erase this positive experience by going as far as to blow up the “Bartman ball.”

This incident is just another misfortune in a very tough history for this Chicago Cubs organization. The team has not won a World Series in over 100 years which is often attributed to a curse brought upon them when they denied a goat entrance to their stadium many years ago.

All these years later, the organization is still working to find the success it had once known all those years ago. A lot of faith has recently been placed in the hands of Theo Epstein who has put the organization through a complete overhaul which has most recently meant the firing of the club’s manager, Dale Sveum.

While the team certainly has not forgotten their troubled past, they are taking strides to reinvent themselves and to put Steve Bartman and any other misfortunes that have plagued them in the past, behind them.