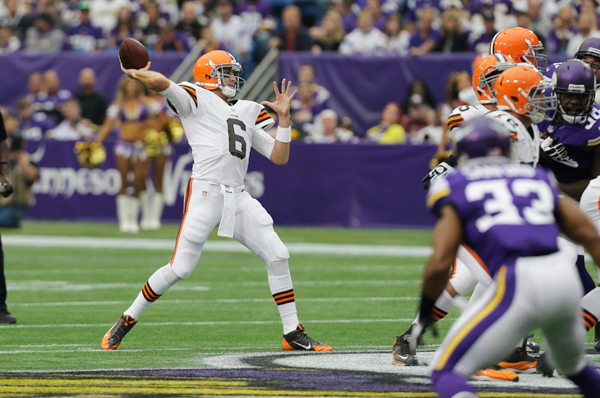 Let’s forget for a moment that the Minnesota Vikings came into their home matchup against the Cleveland Browns 0-2 and applaud the Browns for the upset they pulled off in the Hubert H. Humphrey Metrodome. When two winless teams meet up, it is hard to call the result an upset, but in the case it is the perfect description.

It is no secret that the being a fan of any Cleveland team is not easy, especially when it comes to the Browns.  2013 is proving to be more of the same Browns fans. The team started the season 0-2 and decided that it was time to start its newest rebuilding project by trading away running back Trent Richardson, its first round draft pick in 2012.  Richardson, who had 950 rushing yards and 11 rushing touchdowns his rookie year, was traded to the Indianapolis Colts for a first round draft pick in 2014.

This news coming after the Browns had announced that Brandon Weeden was injured and they would be starting third stringer Brian Hoyer against the Minnesota Vikings. Hoyer had spent three years with the Patriots and one with the Cardinals. To many it looked like the team was packing it in for the season already, and then Sunday happened.

Brian Hoyer had 30 completions, 321 yards, and 3 touchdowns. He connected with Jordan Cameron for the winning score with 0:51 seconds left in the game. He also had 3 interceptions and was sacked3 times but in a win, those mistakes can be overlooked. Josh Gordon had 10 receptions, 146 yards, and 1 touchdown. The defense held Adrian Peterson to 88 rushing yards.

This was a complete game played with a lot of heart. The Cleveland Browns probably will not win more than 2 or 3 more games this season but the players went out and proved they have pride and will not just mail in the season, even if management has decided the team should be playing for the future. Now had this game been against an elite team, the Browns probably come away with a loss but the schedule had a team it could beat and the players played for pride and for each other and in doing so, they gave their fans something to cheer about, at least for one week.Now the fans will have to hope that the extra draft pick will be used to help a serious rebuilding effort and they can start celebrating playoff teams and winning more consistently.