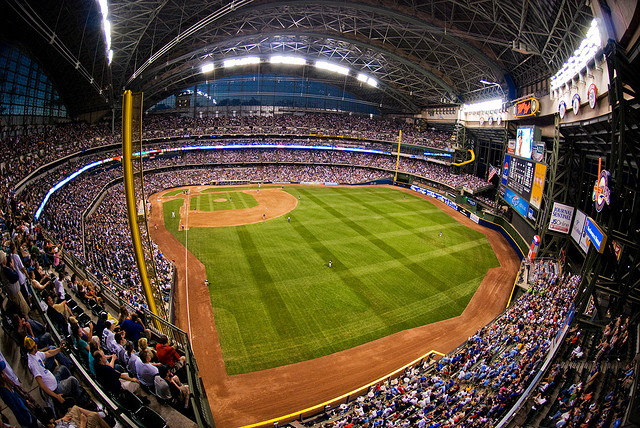 Well we are one month into the season and there are plenty of surprises, along with expectations that everyone had coming in. Yes I know it is much too early to mean anything, but a lot has happened in the past month that just needs to be talked about.

Milwaukee Brewers: The Brew Crew are currently first in the NL Central, boasting a 20-7 record and are 6.5 games ahead of the second-place St. Louis Cardinals. This is largely due to the play of their stars like Ryan Braun and Carlos Gomez. Braun is currently batting .318 with six homeruns, and Gomez with his .288 batting average and 32 hits. As a team the Brewers are batting .256 and have scored 106 runs. Though these numbers are good, and much better than they had last year at this time, they are still only middle of the MLB. The real reason to the Milwaukee’s success is their pitching, particularly their bullpen. Right they have a team ERA of 2.56, which ranks second in baseball, along with the most saves at 13.

Arizona Diamondbacks: There is no way around it, the D-Backs are just pitiful. Currently they are 8-22, dead last in the NL West, and are 9.5 games out of first. Even with last year’s NL MVP Runner-Up Paul Goldschmidt and the acquisition of slugger Mark Trumbo, Arizona cannot seem to generate Ws. They have more total runs than the AL East leading New York Yankees, and the same team average as the NL East leading Atlanta Braves. So where are they going wrong? Pitching. They are the antithesis of Milwaukee in that department. Right now as a team, Arizona claims the league’s worst ERA at 5.27. That and the fact that opponents are currently batting .272 against them (which is the fourth highest in the MLB) are the heavy contributors as to why this team that finished second in the NL West last season, is so awful to start this one.

Atlanta Braves: As always, the NL East is a weak division for the Braves to dominate. Right now they have the second-best record in

baseball at 17-8, and are 2.5 games up on the Mets. They are solid as always. Their offense is nothing to write home about (which is surprising considering their lineup: Freeman, Hayward, Uggla, Upton), as the Braves are currently 27th in runs scored, and 20th in hits and batting average. But as it is with the Brewers, pitching is the name of the game. Atlanta currently has the lowest team ERA at 2.04, and the lowest opponent batting average at .211. This is headed by veteran Aaron Harang and second year starter Julio Teheran. Harang currently has the lowest ERA in baseball at .85, and Teheran is fourth at 1.47.

Chicago Cubs: Not that hard to guess. There really is not a whole lot to say. The Cubs are 8-17, last in the NL Central, and are 11 games out first. Chicago is also 28th in runs scored, 25th in team average, and 27th in on-base percentage. They’re highest offensive ranking is 16th in the league in home runs, because hey, they have to score runs somehow. Other than that, they are in the high 20s in every offensive category. They’re pitching is actually not awful though, at least starting pitching. But the big number to look at is saves. The Cubs have just two on the year, and the majority of their games have been lost due to their bullpen.