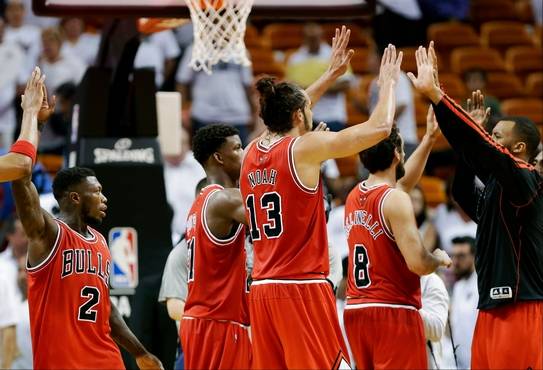 It is the story that all NBA fans know, just over a year ago the Chicago Bulls were a team that had one goal: to win a NBA title. It headed into the playoffs as the top seeded team in the Eastern Conference for the second time in as many years. In a tough fought game 1 against the Philadelphia 76ers, the Bulls were coasting to a win when the play that has defined the team since occurred. With 1:20 left in the game, Derrick Rose tore his ACL and with that what was supposed to be a banner year turned into a six game series loss to the 76ers.

In the offseason, facing a lost season, the Bulls were force to retool their bench and the unofficial goal became “just be competitive in the standings until Rose comes back”. Many analysts predicted a 7th or 8th place finish in the conference and to just squeak into the playoffs and that they were would change the playoffs dynamic when Rose came back. Well Rose never came back and the Bulls overachieved and finished 5th in the conference. #TheReturn was supposed to be the heart and the soul of this team but over the past 5 nights, the anticipated return has been forgotten and the Bulls have proven they have more heart that any team in recent history.

This team is not supposed to win, at least not in this NBA era of Big 3s and superstars clustering in just a few select markets. No team that is made up of a few good players and a mediocre supporting cast should be able to hang with teams stocked with perennial All-Stars and MVPs and yet here it stands. How unlikely was the Game 7 win in Brooklyn and the Game 1 win over the Heat? Considering the games were won with Rose still sitting on the bench not quite ready to come back,  Luol Deng (one of the Bull’s All-Star selections along with Joakim Noah) in the ER and having to get a spinal tap, and Kirk Heinrich sitting out with a bruised calf, the odds could not have been good. Factor in the fact that Taj Gibson was dealing with the flu and that Noah is still dealing with a lingering case of plantar fasciitis and it would seem well near impossible.

What is transpiring now with the Bulls is taking the concept of every game being a team effort to a level that may never have been seen before in the NBA. When one guy goes down, there is another that rises to pick up the slack. All credit needs to be given to coach Tom Thibodeau, who has proven that he can very successfully coach under less than ideal circumstances. Considering all that the Bulls have suffered through this season, it would be easy for any coach to cut their losses and admit it is just a lost season. Thibodeau has refused to do so, he continues to try and find new ways to motivate his team and get them to believe they can win. The rules for the award for Coach of the Year should be amended so that playoffs can count and the voters can recast their ballots because it would be impossible to deny Thibodeau the award now.

Throughout the playoffs there has been talk about if/when Rose would return. There was speculation, started by Derrick’s brother Reggie, that he could play in the second round. Well, he ruled himself out of game 1 but left the speculation to continue as he commented that his return was still up in the air. In all honesty, it would be a disservice to his teammates for him to comeback now. Granted, the return was mismanaged from all sides but it would only look petty for him to try and come back once the Bulls started winning.

It was only a game 1 in Miami but this will be a playoffs that will stick with Bulls fans for many years. Barring some sort of miracle, it will not be remembered for a NBA title but rather the grit and determination that a bunch of thrown together players showed amongst injuries and continually being the underdog. This team deserves to be remembered for what they accomplished and not for Rose trying to come back and lead the team to a title once they showed life in the second round. They are emerging as a team that is more than just Rose, they have a chance to flip the script the season and not allow it to be just another lost season. That is how this teams deserves to be remembered by history.