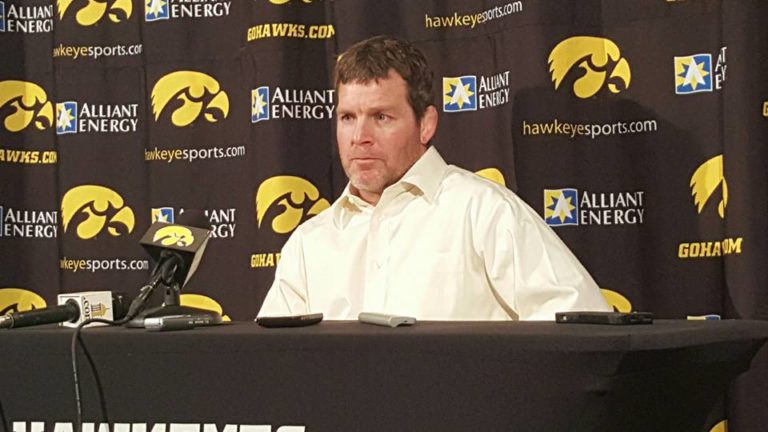 The Hawkeye wrestling season is starting to fall into a bit of a pattern. Big time performances from the team’s returning leaders and then underperformances by the middle of the lineup. The #2 Iowa Wrestling Team may have beaten unranked South Dakota State 28-15 in Carver tonight, but it wasn’t all smooth sailing.

Not that everyone looked sluggish though. Far from it, #2 Thomas Gilman started off the night at 122 absolutely dominating the Jackrabbits’ Kahlen Morris. Gilman was quick to set his fast paced, high-scoring tempo. After taking a 10-2 lead in only about a minute and a half, Gilman found an underhook while cutting Morris and put him to his back for a fall at the 1:34 mark.

Iowa’s #2 Cory Clark continued Gilman enthusiasm as he wrestled out a tough match against a talented #15 Bryce Simms. Clark found a takedown in the first period with one of the most agressive russian holds I have ever seen and then held on to his lead to win the match 4-1.

Then at 141 is where the Hawkeyes began to hit some rough water as redshirt freshman Logan Ryan lost to former teammate at current SDSU redshirt freshman Seth Gross. Despite leading for most of the match after a first period takedown, Ryan could not manage an escape in the third period and ended up losing 2-3.

At 149 #1 Brandon Sorensen wrestled a good match finding an ankle early on and then a reversal in the second. He was very even-keeled and in control the whole time winning the match 8-0 over Alex Kocer.

Then at 157 Edwin Cooper Jr. showed promise against another ranked opponent, #6 Cody Pack, yet still only managed to come up short. After giving up a double leg in the second period Cooper was quick to catch Pack trying to work a leg in and reversed him. Then Cooper had one last glimmer of brilliance when he scored a late takedown with only 35 seconds left in the 3rd period to take a one point lead, but he then immediately gave up a reversal while looking for a pin and lost the match 5-6.

The last dissapointment of the night came at 165 where redshirt freshman Burke Paddock excited the crowd by escaping three deep shots in the first period but then finally falling prey to one of #20 Luke Zilverberg’s double legs in the second period. Burke kept it close, but lost 2-4.

The remaining matches were then pretty much Iowa just doing what they do best: winning wrestling matches. Alex Meyer had a bit of a scare when he gave up a first period takedown, but then he got back into gear and pulled out a 5-2 win over David Kocer.

Maybe the most exciting match of the night was the Hawks’ #8 Sammy Brooks who somehow managed to pin the Jackrabbits’ Brady Ayers out of tilt. Needless to say he received a standing ovation after his 43 second fall.

At 197 Iowa’s #4 Nathan Burak was strangely absent so SDSU got a free six point forfeit, but the meet had already been sealed by Brooks’ previous pin which put the win out of reach for the Jackrabbits. Then redshirt freshman Sam Stoll ended the night with a real crazy win by disqualification. Stoll was completely in control of his match repeatedly tying up with SDSU’s Alex Macki, but Macki wanted none of the Greco standout’s tie-ups and backed off of the mat five time for five stalling calls which is enough to forfeit a match. Hawks won 28-15.

At the end of the night though, head wrestling coach Tom Brands was still hungry and looking for improvement from the middle of the lineup more importantly from the team in general, especially when it comes to controlling the tempo of the match and wrestling the Iowa way. “I would say if you are going to grade us based on how we imposed our style against their style… we probably don’t get a very good grade.” He then added, “We have got to be ready to go when Rutgers comes in.”

Junior Sammy Brooks added, “There’s always more you can do… There’s positive and negative. I think some guys just need to pick it up a little bit.” Even in his own wrestling he mentioned, “There’s definitely more for me to work on. I can pick up the pace of my wrestling, I can score more points, or when I’m scoring points my positioning could be better. There’s always ways to improve wrestling.”

When questioned about the disappointments at the middle weights on the day Brands said, “You have got to be good at all positions. It’s something that when you talk about those midweights that’s what we need to do… We need to be able to continue to wrestle the entire seven minutes.”

As far as news on Burak goes Brands said left it very vague saying, “We expect him to be back when we need him the most.”

Although it is unclear when Burak will make his return, the rest of the Hawkeye grapplers will see their next action this coming Thursday the 10th at home in Carver-Hawkeye arena.