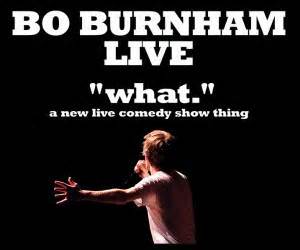 Bo Burnham is no stranger to Iowa City. In 2010 he had a show at The Englert Theatre, and in 2012 he had another show at Englert Theatre. Last night Bo returned once again to the IMU Main Lounge, with brand new material in his fourth comedic tour, the “what.” Tour.

For those unaware, Bo Burnham is a musical comedic sensation who gained a fan-base via YouTube in 2006. His popularity grew over the years, and in August 2008 he became the youngest comedian to record a Comedy Central comedy special, just four days shy of his 18th birthday. His first CD was released in 2009, and has since released a second, and in the process of recording his third, What. Recently he filmed the first season of his MTV show, “Zach Stone Is Gonna Be Famous”, in which he stars, writes and produces. The first episode premiered last Thursday night, (watch the first full episode here), and 11 more episodes of season 1 are set to air Thursday nights at 9:30 central.

People, (mainly UI students), lined the street outside the IMU waiting to see Bo. Some people had been waiting for so long that they were working on homework while waiting for the 7pm doors. Loyal Bo Burnham fans.

Opening comedian Drew Lynch had me laughing through the entirety of his set. Not one of his jokes flopped and I was highly impressed with his bravery. Lynch has a verbal stutter due to a sports accident involving his vocal chords, yet still is an amazing comedian and stand-up performer. Check out his stand-up here.

After Lynch’s act, Bo Burnham hit the stage. He opened the show with a funny, but bizarre five-minute-long narrated introduction. It included dancing, singing, magic tricks, 40 seconds of “prolonged eye contact” with an audience member in front of him, and shouting “Fuck you!” to the front row.

The first song he played was called #Deep,  a new song from his upcoming album, and followed it with the most hilarious and vulgar “love poem” you’ve ever heard titled “I Fuck Sluts”.

No one can argue that Bo Burnham is not talented in any aspect, and I was pleasantly surprised by his ability to play the keyboard. I also was surprised that some of his comedic songs and material had some serious underlying commentary on actual issues like religion, gay rights, and shallowness of the music industry.

Bo closed the show with a hilarious new song he recently wrote, which he described as “a song from the perspective of God.”

But after he exited the stage, Bo came back on stage and performed two of his classic and highly popular songs, “Love Is . . .” and “OH BO”. During “Love Is . . .” he changed the Anne Frank lyric to “. ..like Anne Frank wanted to be a Belieber.” Which the crowd went crazy for, and even earned a laugh from Bo himself as he delivered it. He also spent some time talking to the crowd, and thanking them for coming out on a Tuesday night. He exited the stage saying “If you liked what I did, my name’s Bo Burnham  If you didn’t like what I did, my name’s Kendrick Lamar.” To which the crowd responded with applause and a standing ovation.

After the show both Drew and Bo waited to meet and take pictures with every single fan that lined up, (which was a couple hundred roughly). When I met Bo I asked him, “What did you think of Iowa City and the crowd?” and he responded with, “Iowa City is amazing.  Been here three times in three years, always fun. They’re great. Very patient, they listen, they’re loud and excited. It’s great. So in conclusion, I hate it.” He kept his humorous answers going when I asked him about his plans to return to Iowa City, “Uh when I have new material  It might take me ten years but. . ” Lastly I asked him how I should end my article about his show, so here you go Bo. What ever you want.