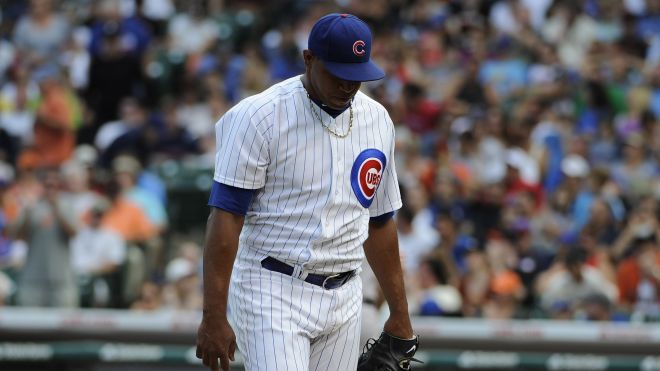 Kerry Wood, is there still life in that right arm of yours?

Can you throw strikes? Could you please come back and get the last three outs when the Cubs have a slim lead?

For Cubs closers, you can’t do much worse, can ya Kid K?

Just three weeks into the season, the Chicago Cubs record, in addition to their closer situation, are the laughing stocks of baseball.

Cubs legend Ron Santo has probably turned over in his grave. Even he, a former Cubs legend and most recently a color commentator for WGN Radio and Cubs baseball, would rather look the other way.

Through April 24, the Cubs sit at 6-14 overall and are already 6.5 games off the pace in the NL Central. The Northsiders have lost 13 of their last 17 games. After today’s 1-0 defeat in Cincinnati, the Cubs record in one-run games is now a measly 2-6.

When you are the third-worst team in baseball, fingers have to point somewhere. The only place fingers shouldn’t point is at the starting rotation. The starters have thrown 12 quality starts, but the Cubs are just 6-6 in those games. The starting five has posted a collective 2.97 ERA, third best in the major leagues nonetheless, but are only a combined 3-11. The other nine teams in the top ten for starter’s ERA all have winning records.

Coincidence? Maybe. But this is Cubs baseball. It’s going to be a long summer.

Where should fingers point then? The bullpen is an easy target.

Carlos Marmol was named the opening day closer despite an awful spring training. Manager Dale Sveum and pitching coach Chris Bosio  hoped the erratic closer would gain his composure when the games started to count.

Needless to say, he didn’t.

Marmol’s first outing of the season was in Pittsburgh as he entered the ninth with a 3-0 cushion. The Cubs closer recorded just one out, giving up one run on a hit, a walk, and a hit batsmen. James Russell and Kyuji Fujikawa bailed Marmol out of a blown save.

His second outing came in the series finale at Pittsburgh and again was dealt with a comfortable 3-0 lead. Marmol allowed two runs on three hits and a walk before inducing a game-ending 4-6-3 double play to notch his first, and only save to this date.

Just two days later, it was Marmol again on the mound in a save situation against the Atlanta Braves. Marmol took the hill with a 5-4 lead but faced the top of the order. B.J. Upton worked the count to 3-1 before drilling a game-tying home run, giving Marmol another blown save. Two batters later, younger brother Justin Upton stepped to the plate and launched a 1-2 pitch to straightaway center field. Game over.

With that blown save, Bosio and Sveum had seen enough and named Fujikawa the new closer. Many Cubs fans, including myself, were calling for Fujikawa to be the closer long before the season started.

He certainly made the majority look silly.

Fujikawa nailed down his first save as the Cubs closer (second on the season after saving Marmol on opening day) at home against Milwaukee. His second save opportunity wasn’t as kind. In fact, the Japanese closer did his best Marmol impression. Given a 2-0 lead, Fujikawa gave up three hits and three runs in an inning of work. Thankfully, a Cubs rally in the bottom of the ninth saved Fujikawa from the loss.

But as the saying goes, “People don’t forget.” I’ll add to that saying with, “especially Cubs fans.”

To add to Fujikawa’s struggles, the new-named closer headed to the disabled list following that blown save at Wrigley.

The Cubs didn’t have another save opportunity until this past Monday night, and it was probably the hardest blown save to watch on the young season. Chicago squared off against the Reds at Great American Ballpark and the game headed to extras knotted at two apiece. Cubs third baseman Luis Valbuena crushed a two-run shot to give Chicago a 4-2 lead in the 13th inning.

However, the bottom half was again not kind with a save on the line.

Cubs reliever Michael Bowden, who threw a 1-2-3 scoreless 12th inning, was sent to close out the game. Bowden did his best Fujikawa/Marmol impression. The Reds rallied for three runs, notching four hits in the inning with Bowden unable to record the final out.

Game two of the three-game series saw Marmol back in his normal closing duties. The Cubs “closer” was unable to strand a runner at second, giving up an RBI single to Joey Votto who entered just 1-for-15 with 9 k’s against Marmol.

Neither fans, nor the front office, expected much coming into the 2013 season, but they certainly expected better than this. A vastly improved rotation, along with young players in Starlin Castro and Anthony Rizzo – the core of the future – provide hope that better days are to come.

Cubs GM Theo Epstein continues to preach patience to Cubs fans, projecting that by 2015 the team will be a playoff contender again. I don’t know about you Theo, but 104 years and counting is a long, long time.