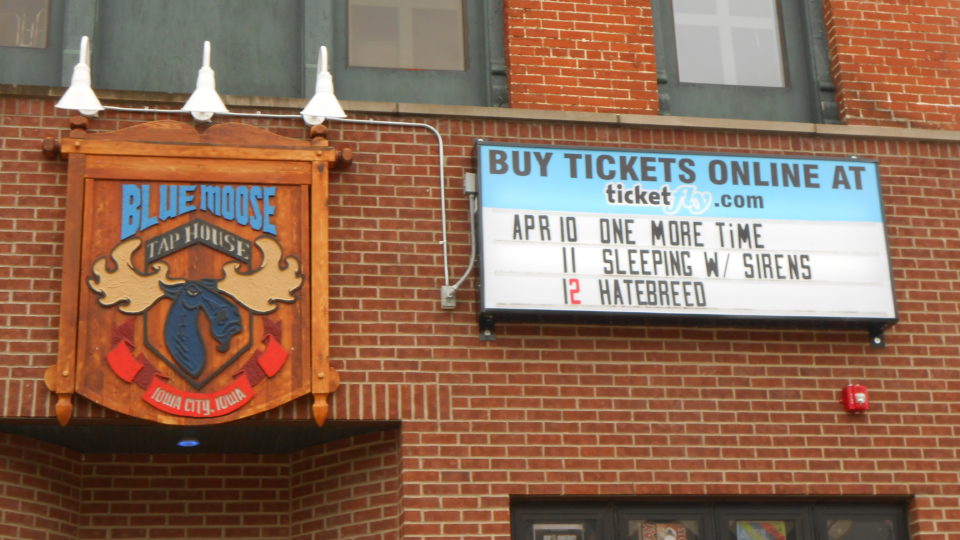 As I walked out of Van Allen Hall after class at 2 pm on April 11th, I passed by the Blue Moose, to see girls camped out, in the rain, waiting in line for the doors to open at 5:30. This did not shock me at all however. It didn’t shock me because I knew who was playing there that night. The Take It Or Leave It Tour was coming to the Blue Moose Thursday night, and the fans were ready.

The sold out show began with the six member, Boston native band, Lions Lions. The Rock/Post Hardcore group shared with the crowd that they had missed the last two shows on the tour, due to a car accident they were in. According to lead singer Joshua Herzer, that made them determined to make this the best show of the tour, and they did not disappoint.

They opened with an original song called Killing Your Grace. The set took a more serious turn when Herzer shared with the crowd the story of his father’s passing, which occurred eight months earlier. Herzer said his father was also a musician, telling the crowd that he was his inspiration and that, “He didn’t die a wealthy man, but he died a happy man.” Following his story the band played, The Undertow. Herzer ended the set by jumping off stage, and singing the final lines of the song on the railing of the raised seats on the sides of Blue Moose, towering over the cheering crowd.

Newly signed to Rise Records, Dangerkids from Dayton, Ohio followed Lions Lions. This five member group, have a female drummer, Katie Cole, which I found very refreshing. Although their Facebook page classify their genre as simply, “Rock”, I would have to say their sound is much more complex than that. They are an amazing mix of Electronic, Rock, and Screamo. The group has two lead singers, Tyler Smyth being one, and Jake Bonham being the other. Smyth delivers spoken rap lyrics, while Bonham delivers the Screamo aspect of the songs. It was a fascinating mixture to watch. I would absolutely encourage going back to the Blue Moose on May 5th to see them open for Attack Attack in the Back In Action Tour.

During their set at Blue Moose, they had the entire crowd off their feet. So much so, that halfway through their second song, We’re All In Danger, the show had to be stopped for an injured woman in the heart of the crowd. Blue Moose security was quick to remove the woman from the crowd to safety. Dangerkids continued their six song set, ending with overwhelming applause.

Conditions,  from Richmond, Virginia  preceded the headliners, Sleeping With Sirens. The four member Rock band seemed to draw older fans, (mid-late twenties), to the show more than the other bands, opening with The End Of Progression. Lead singer Brandon Roundtree was very funny, charismatic,  and engaged the crowd throughout their performance. The group’s set ended on a high note with Better Life. However, I would suggest checking out, Walking Separate Ways, from their newly released album, Full Of War.

Finally, a little after nine o’clock, (and a tease appearance on stage of lead singer Kellin Quinn during sound check), Orlando Florida natives, Sleeping With Sirens  took the stage with an overwhelming response from the crowd. Kellin Quinn’s stage presence and passion on stage lived up to the hype.

The set took on a heavier vibe when they played,  A Trophy Father’s Trophy Son. The emotionally fueled song is an anthem for those who had parents who weren’t there for them, like singer Kellin Quinn’s own father. The song ended with the audience singing along acapella with Quinn, “Is this what you call a family?”. They followed with a song they’ve never sung on tour before, because they “need to get rid of old songs, to make room for new ones.”, according to Kellin, called Fire.

The show continued on a lighter note, with  Quinn telling some slightly inappropriate, (for the boy I saw no more than 11 years old in the crowd), but hilarious anecdotal stories. Sleeping With Sirens closed the show with a two song encore; playing their two most popular songs off their 2011 album, Let’s Cheers To This, Do It Now Remember It Later, and If You Can’t Hang.

If you wanted to catch Sleeping with Sirens, but couldn’t make it to the show, they will be on tour all summer with the Vans Warped Tour.