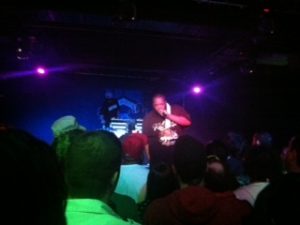 Killer Mike slaughtered the Blue Moose. He was brought to the Mission Creek Festival to do it, and he did it. Not only did he deliver an entertaining and wild show but, as he is known to do, he also spread some wisdom as well. Hailing from Atlanta, Mike started off his career in the nineties and debuted on OutKast’s classic, Stankonia. Since then he has released a slew of records with the hailed R.A.P. Music (2012) his most recent.

Iowa City’s Rich Rok opened the show with his DJ set of blending samples classic from the likes of Snoop Dogg and Notorious B.I.G. to more the recent Danny Brown. The atmosphere was set and a slick transition into Iowa City’s own AWTHNTKTS proved to be an excellent performance to pump up the eagerness of every one there. Both acts had solid sets and are certainly worth checking out if one gets the chance. 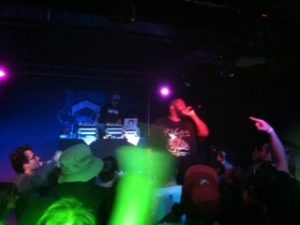 A little before midnight Killer Mike took the stage and an onslaught of smooth, witty verses ensued. His remarks between songs weren’t just banter but intellectual and political insight that drew cheers from the crowd. This man is intelligent and his music and political knowledge proves it. Half way through the show he remarked, “That will be the end of the aggressive shit, but know I do it for you, you, you…” in reference to his activism. There was a hilarious appearance by Ronald Reagan, in vinyl mask form, while performing “Reagan” and a nice anecdote about knowing one’s rights. From there, the partying began in a different way. A great story about strippers as relationship therapy (you had to be there) was a hilarious juxtaposition to the activism. Throughout the show, Mike dished out freestyles only a seasoned and intelligent rapper could deliver: he served many moments of delight. He tore through his catalogue and featured a generous portion of tracks from R.A.P. Music.

The show wasn’t short of optimistic, beautiful moments either; he related a story about being raised by his grandparents—the harsh and kind moments— to the audience. He said honestly, “I’m gonna have a tear in my eye.” He closed the show with “God In The Building” and he stepped into the middle of the crowd ending it with a freestyle variation of one of the verses. His joy was obvious throughout, and it was only more evident when after the show he stayed for signings and pictures. Killer Mike gave everyone many reasons to be optimistic; it’s safe to say most people left the show glowing.