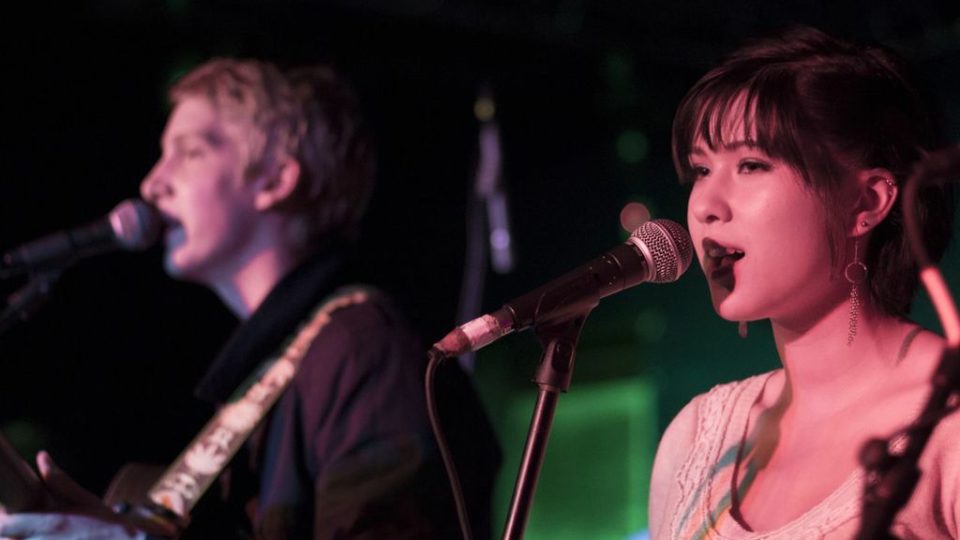 Divine Fits is a band that will surprise you. They deliver what you would expect and keep on giving. Despite having only one album—A Thing Called Divine Fits-and only existing for a brief amount of time, they have a live cohesion that could rival any seasoned band. This might have a little to do with the fact that the men behind the band are seasoned musicians themselves. Britt Daniel (of Spoon), Dan Boeckner (of Handsome Furs and Wolf Parade), Sam Brown (of New Bomb Turks), and Alex Fischel make up the quartet that many have deemed a “supergroup.” Recent performances opening for the Flaming Lips at SXSW and the Black Keys in Las Vegas might be just evidence for such a claim. Their performance at the Blue Moose Tap House for Mission Creek Festival was no exception.

Iowa City band No Coast began to liven up the venue and they did just that. Their thirty-plus minute set was full of harmonies and folky goodness. As a local band, they are getting their name out more and more and they are certainly worth checking out if you ever have the chance.

Emperor’s Club, an additional Iowa City act, continued the good form when they brought their own blend of punkish-pop vibes to the eager crowd. The five-piece garnished their set with intricate funky moments which provided a nice juxtaposition to the rest of the music throughout the night.

Divine Fits took the stage with Boeckner insisting, “Iowa City! Let’s get crazy!” They rolled into their set smoothly with a full crowd supporting the welcomed weight. Their stage presence was splendid, with Boeckner and Daniel pushing and moving out to the crowd; they made it clear they wanted to deliver their set with the showmanship one would expect from seeing their other bands. That being said, Divine Fits exists on its own as flourishing musical act, you don’t need to know the other bands to enjoy their splendor. From pulling each other’s hair, shaking their instruments, and walking out through the crowd, you could feel the band’s intimacy and it made the experience all the more enjoyable. They hit just about everything on A Thing Called Divine Fits, “Like Ice Cream,” “Would That Not Be Nice,” “Flaggin A Ride,” it was all there.

A mentioning of the famous Blue Moose beer boot from the band launched the set into the surprise of the night: a well-worked cover of Frank Ocean’s “Lost” which delivered an enjoyable punch.  Their cover of Tom Petty’s “You Got Lucky” was a handsome addition to the already fantastic set; they tweaked the covers to their own style and even played a few new songs to expand their limited catalogue. An ovation beckoned them back on stage for an encore which ended with “Shivers” to close out the night.

Divine Fits are living up to the standards set before them and they establishing themselves as an act that can play any crowd, large or small. The show was a welcome addition to the magnificent Mission Creek Festival and certainly a highlight of the week.