As the crowd warmed up for Detective April 4 at the Mill, there was a definite atmosphere that could only be created by a gathering such as Mission Creek. People spilled into the Yacht Club — bands and concert goers alike. 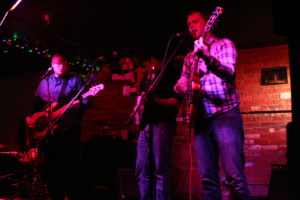 Everyone there had wandered in at some point or other, following the scent of their favorite band or maybe just on a whim to have a peep at some appealing noise they heard from outside the club.

With a lineup of Mirror Coat, Gloom Balloon, The Multiple Cat, and the band that everyone seemed to be eagerly awaiting, Detective, there were a lot of reasons to drop in.

Mirror Coat started off the night with a dreamy set.The local band showcased their spot-on harmonics and  drowsy melodies that made the sounds waves seem as if they were floating slowly through the crowd.

Up next, Gloom Balloon caught the crowd off guard by immersing his fans in his music and often even embracing them. 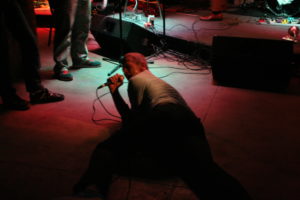 Although his lyrics are melancholy, Gloom Balloon’s Patrick Fleming’s utilizes his ability to get into a crowd and literally stir it up to get his audience properly excited.

It was hard for the crowd to even settle down when it  came time for The Multiple Cat to take the stage. 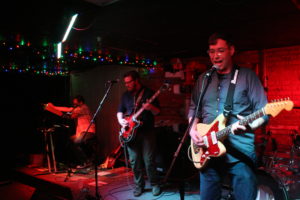 Headed by Patrick Stolley, The Multiple Cat appeared at first to be setting a slower pace than the previous bands. But, it soon became clear they were just warming up.

The Multiple Cat delivers a stellar indie-pop experience that catches your attention with its distinct bass riffs and keeps you listening with Stolley’s well crafted voice.For sure, The Multiple Cat is smooth and that’s what makes them a good listen.

Once time for Detective, the air must have been just right because every riff seemed to bring concertgoers further and further into the music. 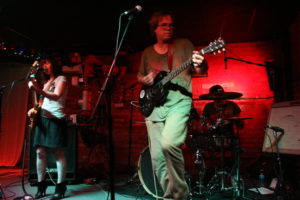 As whole, the band has a kind of sexy, rock and roll look to them — a kind of nostalgia from the days when music had soul and meaning. But once started, Detective does anything but make you think about the past.

Their music grabs your ears, reaches in, gives your brain a massage, and then blows your mind, subtly and skillfully with a blast of heavy guitar riffs. 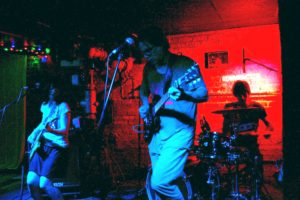 The L.A. based band consists of guitarists James Greer and Guylaine Vivarat and Chris Dunn on drums. 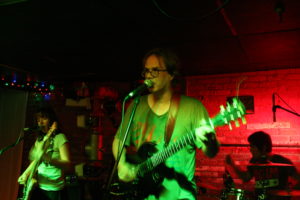 At times a song will take on the edge of hard rock only to give way to soft caresses of guitar and vocals from  Vivarat, but Detective always keeps you on your toes — only letting you relax long enough for Greer to get fired up.

The mixed emotions the trio is able to provoke made sure your night would be topped off as you left the club.