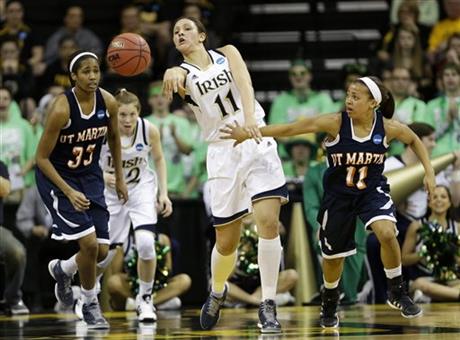 It isn’t often that a team that loses by 33 points in the NCAA Tournament has the star of the game.

But when a player scores 37 points and ties an arena record for shot attempts, that’s what happens.

Despite a 97-64 thrashing by the top-seeded Notre Dame Fighting Irish Sunday afternoon at Carver-Hawkeye Arena, UT Martin’s Heather Butler had a career game, tying the Carver-Hawkeye Arena record for shot attempts — 30 — in the process. Butler hit six three-pointers, including two that banked in.

“We list her at 5-5, but she’s not, she’s about 5-3 or 5-4, and what that young lady does is absolutely amazing,” McMillan said. “She’s one of those rare kids that looks at situations and says: What can I do to to be my best in whatever given situation I’ve got.”

Butler said it was just that kind of night for her.

“I just shot it with confidence, and if the backboard helps you out a little bit, you’re going to have a good shooting night,” the 5-5 guard said with a smile.

The 37 points was the second most ever scored against the Fighting Irish, and Notre Dame head coach Muffet McGraw called it “the best individual game anybody’s had against us all year long.”

Despite the explosion from Butler, Notre Dame’s strength in the paint was far too much for the Skyhawks to overcome. The Irish outrebounded the Skyhawks 49-14, and scored 56 points in the paint— 26 on second chance opportunities.

McGraw said she placed an emphasis on winning on the glass, and the result showed on the court.

“I thought offensively we really went after it,” McGraw said, “I think that we’re capable of getting to the backboard and boxing out, and I thought we did a really good job defensively.”

The Skyhawks hung around with the Irish for much of the first half, trailing just 38-31 with 4:03 to play in the period, after — what else? — a three from Butler. Notre Dame would go on a 22-2 run to pull away from UT Martin and advance.

Notre Dame All-American Skylar Diggins was held mostly in check with ten points on   3-of-8 shooting, but a career-high 27 points from freshman guard Jewell Loyd and 22 points and 10 rebounds from Kayla McBride was more than enough to power the Fighting Irish.

McGraw said she was impressed with the composure of the freshman Loyd in her first NCAA Tournament game.

“You go into your first NCAA Tournament game and you wonder how the freshman is going to do,” McGraw said. “You think back to her previous career high against Baylor, and you think, she’s definitely a gamer.”

The Fighting Irish came into Carver-Hawkeye Arena looking to start its third straight run to the Final Four. And even though Heather Butler stole the show, the first part of that journey is complete for Notre Dame.