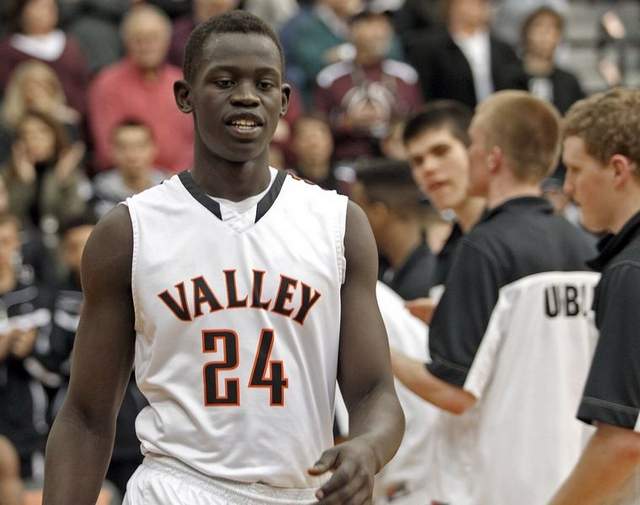 For being a consensus “three-star” recruit, Peter Jok has created a lot of buzz around the Hawkeye basketball community. The West Des Moines Valley product, is a 6’6” small-forward with the athleticism to create his own shot, and the long-distance range to leave defenders in dismay. His tangibles suggest that he would join Harrison Barnes, Marcus Paige and Adam Woodbury as another elite talent in the recent basketball-crop from the state of Iowa.

The Sudan native, however, only received offers from Iowa, Drake, Creighton, Iowa State and Illinois.

Jok is your classic high-risk/ high-reward because there’s a catch.

After being the nations top recruit for the 2013 class early during his freshman year of high school, Jok suffered a severe-knee injury, which sent his stock plummeting. Jok was far less impressive during his junior year and AAU campaign, which led many coaches off his scent. Iowa, however, was one of the few teams that kept at Jok.

While he is still rehabbing, his post-injury form suggests that he will be just a “guy,” who contributes in Iowa’s rotation. On the other hand, a cautious optimist may see the plausibility that Jok could fully recover from his injury and be considered a five-star caliber player. His smooth mid-range jumper and long-distance accuracy makes him an impact-player regardless.

It has been quite a few years since Iowa has really spread the floor with several downtown threats. Josh Oglesby, was touted as good shooter coming out of high school in 2010, but hasn’t shown anything but short-flashes during garbage minutes during his career. But early signs from freshman point-guard Mike Gesell show disciplined ball-distribution and a knack for the three-pointer. Jok and Gesell could be that tandem that creates space in Iowa’s offense over the coming years.

Jok would also be joining a young and talented frontcourt that includes Woodbury, Aaron White and Wisonsin-transfer Jarrod Uthoff.

Eric May is the only scholarship senior this year and unless there is an early departure by an underclassmen, by signing Jok to a LOI in November, Fran McCaffrey will have made his one signing for the 2013 recruiting class.