Tens of children between the ages of six and eight trekked into The Englert Theatre at 10 AM on Wednesday, February 27. The snow did nothing to stop these children from making it to the Englert on time. This field trip was an exciting and educational experience for the kids. Not only did they enjoy a morning away from the classroom, they learned about how to keep their bodies healthy and happy.

Amid the chatter of the children, a voice rang out: “Slim Goodbody’s program will begin in two minutes!” The voices of the kids immediately replied: “What? No!” They eagerly anticipated the next two minutes and before too long, a man wearing a body suit ran out on stage. It was none other than Slim Goodbody! His program “Bodyology,” performed across the nation, teaches the elementary school children about their bodies. 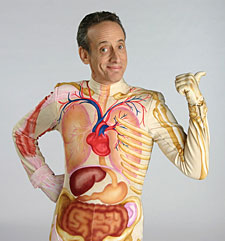 Within moments, Slim had the children singing and chanting phrases like “yay body!” and “healthy habits!” After teaching them the Good Health of Allegiance, Slim sang and danced around the stage. Mr. Goodbody told his audience about the five food groups, body cells, and parts of the human body like the diaphragm. Additionally, he selected a few students to come on stage to show off their “marvelous muscles” by performing tricks such as the splits. One of the highlights of the show involved Slim Goodbody rapping about the body’s bones.

Eventually “Bodyology” wound to a close. Although Slim bid the audience farewell at 11, he performed again later that day at 11:40 AM. More information can be found on Slim Goodbody’s website, www.slimgoodbody.com, or by liking his page on Facebook.