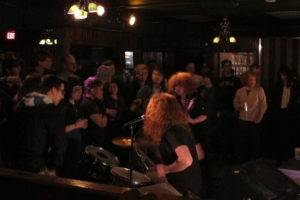 After their first few songs, a small crowd gathered in front of the stage to take in the music up close.  Their style shifted markedly from song to song, at times embodying a pure reverb-infused punk and at others moving closer to a blues-y, almost classic rock sound.  They closed with “Get Protection,” a solo-heavy throwback to Ramones-era punk that got the crowd moving.  As they left the stage, anticipation built for White Mystery. 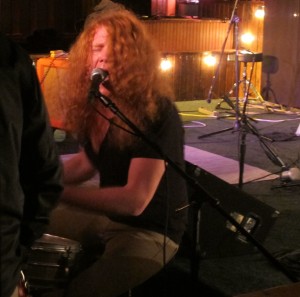 Chicago sister/brother duo White Mystery is known as much for their corybantic style as they are for their matching heads of untamed red hair.  They’ve been playing together and touring tirelessly since 2008, and know just how to get a crowd into their music. They showcased this well-developed stage presence at the Mill by deciding to abandon the stage altogether, opting instead to play on the floor just in front of it.

As Miss Alex White and her brother Francis Scott Key White began setting up their equipment, a tight ring of audience members formed around them.  Soon all the seats in the house were empty and the crowd was ready for the show.  After an extremely brief sound-check, White Mystery launched into their set.  With drinks in hand, audience members who were now just inches away from the band began to sway rhythmically to the fuzzy sounds of Miss Alex’s distorted guitar and howling vocals.  At this point it felt like the show was taking place at your friend’s house party instead of an actual concert venue.  In a word, it felt personal.  White Mystery’s songs are generally around two minutes in length and their live show strings them together largely without breaks.  One song bled into the next, which imbued the show with a very garage-punk quality.  That feeling was driven home by Francis’ frenetic percussion skills and the duo’s near-constant head banging.

About halfway through the show they took a quick break to address the crowd.  After a few kind words about Iowa City and a shot of whiskey from an audience member, Miss Alex shouted, “This Song’s for you guys!” and they played their famed “Birthday Song.”  After several more of their signature fast-paced tracks, they brought things down a notch or two with the slightly more subdued “Kickin’ My Ball.”

Throughout the show, audience members shifted in and out from the front of the stage, some finding seats around the bar.  When Alex announced their last song though, the seats once again quickly emptied.  The crowd swelled and by the end of the song there was a full-fledged mosh pit forming, a sight somewhat unfamiliar at the generally hip, laid-back Mill.  As reverb filled the air at the end of an extended guitar solo, Francis stood up and punctuated the end of the show by smacking his cymbal down onto the stage behind him.  As the sounds of the guitar and cymbal crash faded out, the band thanked the crowd for coming and the show ended with the same high-energy feeling it had begun with.