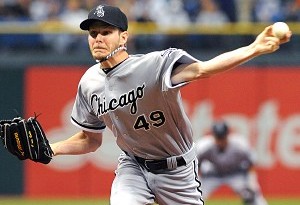 Baseball is back and I couldn’t be happier.

Spring training games began last Friday, a week earlier than usual, due to the World Baseball Classic. However, with spring training now in full swing, not all teams are fully functional just yet.

The Chicago White Sox are one of the few teams who are refusing to use their starting rotation until March 1st, rather than right away.

We’ve already seen Matt Cain, Clayton Kershaw, Yu Darvish, Tim Lincecum and others take the mound for their teams but the White Sox have decided to wait to run Chris Sale, Jake Peavy and co. out onto the field.

With the exception of Jake Peavy, the White Sox have a relatively young pitching staff, led by 23-year-old Chris Sale. Last season was Sale’s first full season as a starter in the Majors. A season in which he went 17-8 with a 3.05 ERA recording 192 strikeouts over 192.0 innings – more than he had ever pitched in one season in his career – and was named to the AL All-Star team.

Sale started off 2012 on fire, recording a 2.19 ERA in the first half of the season with a 10-2 record in 16 starts. However, as the season went on, the innings began to take their toll. Sale, like others on the staff, was becoming visibly tired on the mound and his stats began to suffer with his ERA inflating to 4.11 for the month of September while the White Sox saw their division lead eventually disappear.

The White Sox also faced an inordinate amount of injuries last season, losing starter John Danks for virtually the whole season and Philip Humber for periods of time. The injury to Danks led to the emergence of Jose Quintana who blew people away by his performance on the mound. In 57.1 innings prior to the All-Star break, Quintana was 4-1 with 8 starts and a 2.04 ERA. Like Sale, Quintana had never been faced with an innings load like the one he had last season and his stats also suffered immensely, recording a 6.75 ERA in September and a 2nd-half ERA of 5.01.

Jake Peavy had a bounce-back year after spending last year trying to find his way back to form following shoulder surgery. Peavy had a pre-All-Star ERA of 2.85 and was named to the AL All-Star team along with Sale, Paul Konerko and Adam Dunn. Peavy was the victim of little run support and finished the season with an 11-12 record and a 3.37 ERA in 219.0 innings pitched, striking out 194.

The biggest questions surrounding the starting rotation entering the 2013 season will be John Danks’ recovery and Gavin Floyd. Danks continues to make strides in his return from left shoulder surgery but it is unclear if he can find the stuff that got him that big contract extension. Meanwhile, Gavin Floyd’s struggles on the mound are no secret to White Sox fans. The constant topic of trade discussions, Floyd needs to find some form of consistency if he hopes to remain on the south side.

Pitching coach Don Cooper and his staff are making the right decision when it comes to the handling of their starters. It is no mistake that the White Sox continually have one of the lowest innings missed to injury numbers in the MLB. There is no need to get these young pitchers into live game action a week earlier than usual just because there are games being played. Patience is a virtue with young talent and the White Sox have plenty of it.

It is clear to me that the White Sox are dedicated to the future of the ball club and its youngsters over putting them on the field prematurely just to do it. There is plenty of reason for optimism on the south side of Chicago with a combination of young talent and veteran leadership. With a rotation of Sale, Peavy, Danks, Quintana and Floyd, there is no reason to think the White Sox won’t be able to stay afloat in the AL Central.