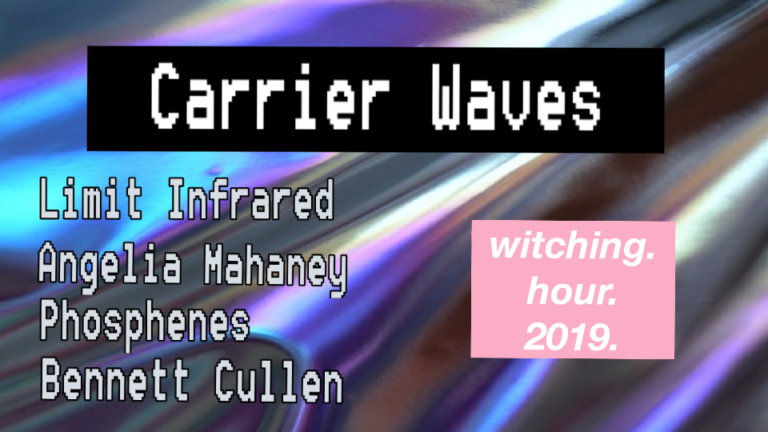 When I walk upstairs to the concert hall at Gabe’s, I am greeted with a scene straight out of a slasher film. The stage is covered floor to ceiling in clear, plastic tarps as if Patrick Bateman had anticipated his next killing to be performed in front of the Iowa City audience. A large screen projects acid-washed visuals, originating from an infrared camera in the corner and is modulated by a booth on stage left. Carrier Waves is the name given to the collaboration of Limit Infrared, the Iowa City electronic producer Brendan Hanks, and Angelia Mahaney, a local visual artist, and choreographer.

I always feel hesitant about going to performance art shows. There always seems to be an aura of pretentiousness and a holier-than-thou attitude of the audience. I am not seeing anything of the like here, though. The crowd is an interesting mix of college art students, older locals, and seemingly dozens of photographers.

The two performers nonchalantly hop up on stage and kneel in opposite corners. The DJ plugs his Macbook in, and the performance begins. Ambient synths arise from the speakers, warping and bending in time with the dancer’s motions. The soundtrack picks up into a thick and rhythmic IDM track, sonically it felt as if Autechre was remixed by Flume. Audibly, the performance crescendos and retreats in tandem with the dancers. Featuring elements of trance, acid house, and IDM, the diverse range of genre and interplay between each made for a very intense and enticing performance.

The choreography presents a story of birth, death, and rebirth. The two dancers are skilled in being able to present a complicated narrative within the bounds of motion alone. While I am perplexed by the exact message the performers attempt to portray, I am able to grasp the general outline fairly clearly. The movements that the performers make are reserved at the start, moving a hand across the floor in time with the beat. As the music and visuals intensify, the dance becomes ever more complex, demanding the audience to absorb each step.

Visually, the presentation is something out of a drug-induced trance. The infrared visuals twist with each motion and shift in color and vibrancy at the pace of the music. As the music plateaus and builds, the visuals follow along. There are themes that obviously reveal themselves throughout; emotions that everyone experiences within a lifetime. During the rebirth phase of the performance, the projection warps and melts. The performers are drenched in intensely shifting waves of color and light, obscuring discernible facial features and dramatizing each movement.

The atmosphere that the crowd provides is an interesting and at times frustrating experience. I had crust punks on the left of me, reeking of body odor and stale liquor and an oblivious photographer on my right, hitting me with his lens multiple times and lacking spatial awareness of the rest of the crowd. Regardless, the audience is generally attentive and invested in the performance.

The performance comes to a close, and the artists tear down the crime scene in a matter of minutes. I’m left wondering how much effort went into setting it all up. Attaching tarps to every inch of the stage could not have been an easy task, but the performers appear to be content, for they put on an immaculate performance and they knew it.