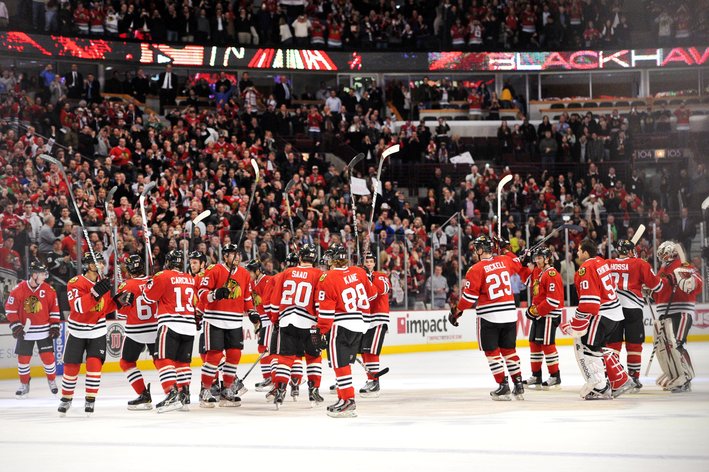 The record-breaking Chicago Blackhawks (16-0-3) will travel to St. Louis on Thursday to face the Blues (10-6-2) in their first away game in two weeks. The Hawks come into this game on what can only be described as an incredible hot streak, having not lost in regulation, scoring 35 points through 19 games, and backed up by two very talented goalies: Corey Crawford and Ray Emery.

Crawford has a .947 save percentage (SV%), along with two shutouts (coming against the Columbus and Nashville), while Emery has a .927 SV% and a win in every game he has played (8). Patrick Kane currently leads the Blackhawk offense in goals (10) and assists (14).

So far this season, eight of Chicago’s games have gone past regulation; three settled in overtime and five in shootouts. Though it would seem that spending this much extra time on the ice might fatigue a team, it has only served to fire the Hawks up more. They have a very strong hold on their first place spot in the Central Division and with a win against St. Louis, would create an even bigger lead.

The Blues have prevailed in three of their last five games and are in the middle of a three game home-stand. Not only will this be a hard fought game because it is division play but the Blues will also attempt to redeem themselves from a loss to the Hawks last month.

They have scored 22 points so far this season and lead the league in power play percentage, which is a part of the Blackhawk’s game that could really use some work. Blue’s goalie Brian Elliot has played the majority of the games this season (9), has a record of 3-5-1 and 28 goals scored against him. However, the last six games have been shared between the team’s other two goalies Jake Allen (3-1-0) and Jaroslav Halak (4-0-1), who have a combined 22 goals scored against them. The Blues offense is lead by Patrick Berglund with nine goals and Kevin Shattenkirk with 14 assists.

There is no doubt the Blues would love to hand Chicago their first regulation loss; at this point there isn’t a team in the NHL who wouldn’t, but so far it seems nothing can slow this exceptional Blackhawks team down.

However, if the Blues continue to capitalize on power play opportunities and Halak defends the goal as he has so far this season, St. Louis will pose a threat to the historic record Chicago has achieved.