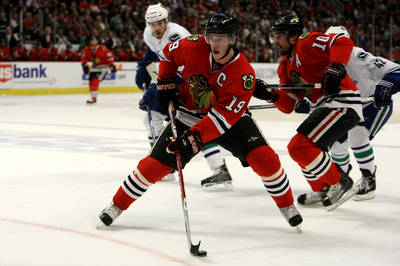 The Chicago Blackhawks have opened up this shortened season with a 13-0-3 record, which ties the longest point-streak to start a season in NHL history.  It took them all of regulation, all of overtime, and the shoot-out to defeat the Canucks, but a win is a win.

The Blackhawks have been impressive and then some as they’ve shown the ability to not only win games, but win them on the road and sometimes in dramatic fashion.  Corey Crawford and Ray Emery, the dynamic goalie duo, have both been spectacular in goal and hope to remain that way if the Blackhawks want to continue to be great.

They stand in second place in both goals for, at 3.3 per game, and goals against, at 1.9 per game.  Some credit goes to the play of the goalies and then some goes to the offense and guys like Patrick Kane, Marion Hossa, Patrick Sharp, and Johnathan Toews who have all been spectacular.

Playing without a key piece in the defense last night, Brent Seabrook, it almost seemed like they didn’t miss a beat, but then came the hit on Marion Hossa.

Hossa took a huge hit to the back on the head from Canuck winger Jannik Hansen and went down without really moving a muscle at all as the training staff tended to him.  It was a cheap hit on Hossa and will most likely be reviewed by the NHL.  Hossa is listed as day-to-day for now, but from watching the hit, it looks like we could be dealing with something long term, which, for the Blackhawks is the last thing they need right now.

Six of their next eight will be played at the United Center in Chicago where they are 5-1 this season.  Half of the games are against teams that are above .500 and half of those games will be played at home.  With the way that the Blackhawks have been playing, their is no reason to think that winning all these games is unrealistic.  However, if the Hossa injury is serious, this could mean bad news for the Blackhawks as he is a key piece to the cog.  Hopefully, he can return healthy and help them keep the streak going.

They look to remain unbeaten in regulation and set the record for most points recorded to start a season this Friday at home against a very solid Sharks team.