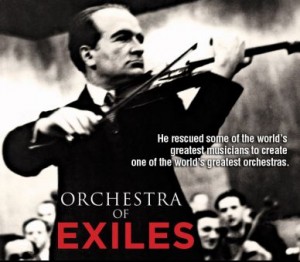 As Jerry Sorokin, executive director of  UI’s Shulman Hillel, greeted the viewing audience of Orchestra of Exiles in the Englert Theater on Sunday Febuary 10th, a hush fell over the crowd. In the presence of silence, Sorokin began the event by thanking the many generous people, and organizations, who made the screening possible. A few of the organizations being the Iowa City Jewish Federation, and the Agudas Achim Congregation.

He then introduced concert pianist, and Academy Award-nominated director Josh Aronson. Aronson had just hopped off a plane from snow-filled New York to join the audience in Iowa city. Aronson was an established TV, commercial, and (in association with MTV) music video director, prior to deciding to create documentaries in 1999. He’s known for such films as Sound and Fury and Beautiful Daughters.

Orchestra of Exiles took Aronson 3 years to make and says he felt truly compelled to make this documentary because at the time of inception, not one artistic piece had been created to tell the compelling story. The documentary itself, is set around the life of world famous violinist, Bronislaw Huberman. Huberman, (a Jew), was born in Poland in 1882, and  by the time he was age 12 was a well established child prodigy, touring Europe and the United States.

Huberman’s fame lasted into adulthood, where after seeing the horrors of WWI, he used his musical prestige to protest against the mistreatment of Jews before, and during the Holocaust. Despite multiple invitations to, Huberman refused to play in Germany during the thirties. In the documentary, Huberman is referred to by musicians and historians as almost “psychic”, in the sense that he knew Hitler and his policies were not as temporary as many believed they were in 1930’s Germany. Due to this belief, Huberman began to form the Palestine Symphony Orchestra, which would later become the Israeli Philharmonic. By doing this, some say Huberman saved the musical achievements of Jewish culture. “How so?”, you may be wondering. The Palestine Symphony Orchestra was not just another classical orchestra. The Palestine Symphony Orchestra consisted of some of the most talented musicians in Europe, if not the world. A vast majority of these musicians were 1st chairs in their former orchestras and, most importantly, Jews whose lives were in danger if they remained in Europe.

After many months and multiple battles for permanent citizenship certificates for each and every one of his 70 Jewish musicians and their immediate family members, the Palestine Symphony Orchestra was formed. Huberman recruited famous musical conductor, and personal friend,  Arturo Toscanini, to lead his orchestra for its inaugural concert in 1936.

Huberman’s orchestra ended up becoming one of the world’s greatest orchestras in history. But what very few know is that not only did he employ his musicians, he saved them. Unfortunately, a handful of musicians gave up their seats in the orchestra and returned home where they met their demise at the hands of various concentration camps.

Huberman ultimately saved over 1,000 Jews, and was as Aronson described him, “a real Schindler.” In fact, the son of an original member of the Palestine Symphony Orchestra and Iowa City resident, Richard Hurtig, was present and took part in the Q & A session along with Aronson. The Q & A was held after the screening of the film. Along with others in the film, Hurtig expressed the undying gratitude him and his family have towards Huberman for saving their family. It was a very powerful thought to think how far Huberman’s actions have spread across the world and have even reached Iowa City.

I have to say that by the end of this film and event, I was left with chills. As a Jew myself, the story of Huberman’s humanitarianism in such a dangerous time absolutely amazed and touched me. His bravery, hard-work, and pure morality goes unnoticed in history books. I am amazed at the fact that so few people know about Huberman and his amazing story, which is why this documentary is so important for people to see.

If this story has compelled you half as much as it has compelled myself, you have a chance to see this amazing documentary on April 14th after Masterpiece Theatre on PBS.

For more information on Josh Aronson and the film Orchestra of Exiles click here.