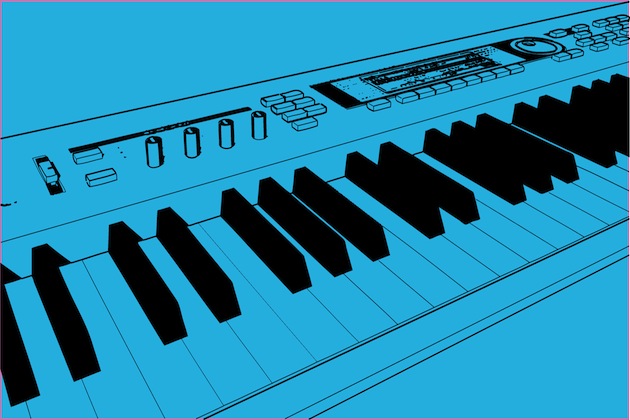 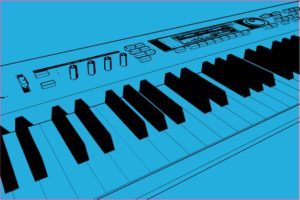 An audience made up of Sound Sculpture fans and those uninitiated to the genre gathered at the Mill Thursday night for the Ambient Showcase.  The sound of conversations filled the room just like any other night, until strange digital groans, beeps and feedback began to emerge from a collection of equipment and wires just in front of the stage.  The only really familiar object amidst this seeming mess of electronics was a guitar.  It was lying on top of the mass, connected by wires to the machines.  A mad scientist in a blue beanie (the Mill’s Chris Wiersema) stood over the guitar and occasionally plucked at its strings to coax out sound.  Next to him, a heavily bearded musician sat at what can best be described as the set of a ‘60s sci-fi movie set.  In front of him were knobs and switches protruding from nondescript gray panels.  He watched, listened and made adjustments as red and green lights flashed in irregular rhythms.  He and Wiersema used these controls to twist the sounds together.  The house lights dimmed and it was clear that this wasn’t a sound check, Lwa had arrived.

The room was dark, but the vacant stage remained lit for a show, adding to the unsettling atmosphere.  As the two musicians worked the guitar and digital sound into not-quite rhythms and almost-harmonies, the majority of the crowd became transfixed on the spectacle playing out before them.  Though as soon as it had begun, it was over.  They only played for about 30 minutes but the stage was set for The Main Sequence, whose name is an astronomical term that refers to a band of “dwarf” stars.  The crowd was about to be taken on a tour of the universe.

The Main Sequence consists of Joel David Palmer and Joshua Alan Weiner.  They are both brilliant multi-instrumentalists, but at this show Palmer primarily played guitar while Weiner played a huge range of instruments and controlled an impressive array of sound modification equipment.  Palmer’s guitar style, it should be noted, is anything but traditional.  During a song that utilized a Theremin (!) Palmer used a guitar slide in a way I had never seen before.  He would play a chord, set the slide, and then let it roll down the neck.  Their hyper-experimental style contorts digital, electric sound into something that seems natural.  It would be a mistake to call their music purely deconstructive.  They don’t just tear apart music down to its bare chords and leave it at that, but start from a sort of bottom point and build skyward.  I wouldn’t call it “art-rock”, but it is most certainly artistic.  Their music is a feeling, more than anything else, and to even try to understand it, you need to see them create it.

The last act of the night was Iowa City’s own Alex Body. It made sense that his set was the last, as his style is the closest to what most would consider “main-stream” music of all that was on display at the Showcase.  This ordering gave the impression that there was an active progression throughout the night toward something more recognizably “musical” and less minimalist in nature.  It was as if the sound in the room had been sculpted into something that would allow for immediately determinable rhythms that backed vocals to tell stories.  When he played “Rules of Summer”, a Flaming Lips-esque track, a few audience members actually got up and danced in front of the stage.  Midway through his show, he left his music to loop and ran to make adjustments to the main mixing boards in the back of the room, by the bar, which reminded the audience that he is the Mill’s “sound guy”.  Arguably, the highlight of Body’s show was his last song “Bimini Road,” from his most recent record No Event.  It’s a song with sweeping harmonies that loop behind lyrics that reference a real-world underwater “road” in the Bahamas. Some believe it to be part of the sunken city of Atlantis.  This song, like most of his others, ended abruptly and the crowd cheered as he began packing up.

Maybe calling the evening a “progression” of sound is wrong.  Maybe it was just a movement of sound in a certain direction.  All three acts make audiences ask themselves just what it means to create music, and just what a “finished product” is supposed to sound like. Hopefully, Iowa City can expect to see more Ambient and Soundscape shows in the near future.