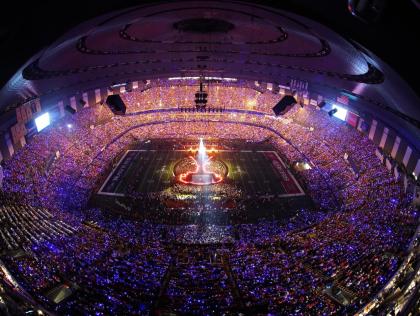 This year was the year that the halftime show was almost more anticipated than the actual Super Bowl. Beyonce and Destiny’s Child wowed the audience with amazing lighting, stage effects, and a mountain of backup dancers.  Even though the 49ers did return to regain some of their dignity in the third quarter after the blackout, the halftime show trumped the entire first half.

Beyonce is one of the most popular female song artists in the world, worth about $300 million, and has been awarded 16 Grammys among many others.  She also is married to Jay-Z, one of those most powerful rappers in the world.

So just how popular was Beyonce’s halftime show in comparison to other years?

If we were to put the ratings of Beyonce’s performance head to head against Madonna’s 2012 performance, Madonna wins. Beyonce scored a 71, which equals to about 109 million viewers. Madonna outscored Beyonce by only one point, 72, but that one point is equal to about five million more onlookers. Last year’s Super Bowl was the second most watched show in television history, and Madonna’s headliner surpassed the actual football game alone with an audience of 114 million.

There have been some very memorable performances in the past Super Bowls, for good and bad reasons. People still talk about the Janet Jackson peep show assisted by Justin Timberlake. Not one of the proudest moments, but it did go down in Super Bowl history.

After the unfortunate incident, the NFL decided to turn to the oldies instead of the present pop culture. The Rolling Stones, Paul McCartney, and The Who joined the list. After the ruckus from the 2004 Super Bowl settled down, the Black Eyed Peas, Nicki Minaj, LMFAO, and other temporary artists were allowed back onto one of the biggest stages in the world.

Michael Jackson’s performance in 1993 was a direct act by the NFL to keep viewers tuned in during the entire airtime. During his song ‘Heal the World,’ the entire audience took part in the visual aspect of the show, flipping up cards to form pictures of children from across the world. This was the first time the networks didn’t cut away during halftime for commercials, and the trend continues today.

The great thing about the halftime show during the Super Bowls is that it brings everyone together. Even if you don’t like football, you probably enjoy food, friends, or music. It is not only the football that makes the Super Bowl the biggest TV show of the year, it is the entertainment side of the show that helps the non-football fanatics sit down and enjoy the four hours of punting, tackling, and touchdowns.