Tags: Caitlin Medina, iowa city, krui, Slow It Down, The Lumineers, Track of the Week 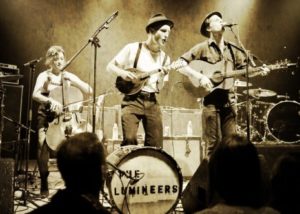 The Lumineers are “an amalgam of heart-swelling stomp-and-clap acoustic rock, classic pop, and front-porch folk” who got their start when front-man Wesley Schultz teamed up with drummer Jeremiah Fraites, the younger brother of his late best friend, Josh Fraites. The two began making songs and playing gigs around New York and later relocated to Denver, Colorado where they placed an ad on Craigslist for a cellist. Neyla Pekarek was the first to respond. The trio joined forces and began playing at the Meadowlark, a basement club where some of Denver’s most talented songwriters came together for an open mic and dollar PBRs.

In 2011, they led a self-booked tour. Shortly afterward they acquired quite the following. On April 3, 2012, the band’s first album was released. Their first single, “Ho Hey,” is an upbeat love song filled with honest lyrics that are nice to sing along to, but I would like to focus on another potential hit on the album titled “Slow It Down”. It shows off a softer, more gentle side while still maintaining their mellifluous lyric style. Towards the end it speeds up a little for their signature upbeat vibe yet still remains sweet. The entire album has a very heart-on-your-sleeve feel and I highly recommend it for anyone!