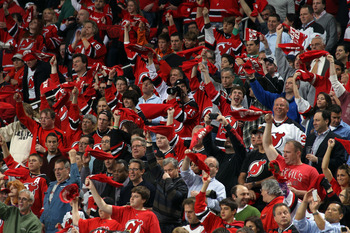 After months of heated exchanges and angry “storm offs”, the National Hockey League finally completed a collective bargaining agreement, and will return to the ice on Saturday evening. In arenas all over North America, referees will emerge from the home dressing rooms and skate the fresh sheets of ice, awaiting the competitors– many of whom probably still jet lagged from games overseas.

During intense weeks of deliberations, it was the fans who were the ultimate losers amid the scrum of hands trying to grab every last dollar. While Commissioner Gary Bettman and Players Association Head, Donald Fehr were engaged in the lengthy arm wrestle, fans watched as games were canceled and fleeting spectacles ignored.

The biggest casualty from this lockout (the third under Bettman’s regime) was the Winter Classic, the grand outdoor stage where two teams would be preselected to play in one of North America’s glorious stadiums on New Year’s Day. The Winter Classic was the crown jewel of the NHL, created following the league’s last lockout to regain the popularity lost from the previous stoppage. Along with this season’s game, which was supposed to be played at the Big House in Ann Arbor, Michigan, the league also lost its All-Star Weekend and ever-popular skills competition.

But, if the NHL salvaged anything from the crippling lockout, it saved the season. Starting Saturday, each of the thirty teams will play a 48 game, abridged season before an exciting dosage of the best playoffs in sports. Much is debated about who saved the season and whether the stubborn owners kept the deal from getting completed ages ago. But, the answer to who won the lockout is a very easy one:

From the league’s perspective, which is all about marketability and making money, the most significant audience to capture is what some call the “casual fan”. With all apologies to the diehards, like Vancouver’s Green Men, the league is banking on your loyalty and support. What gains the television ratings and sponsorships are the—for lack of a better word– “pink hats” who come to the arenas for the polarizing players. Fantasy Football leads this charge in football, basketball has the biggest quantity of superstars of any sport and baseball has been passed down from generation to generation. Hockey is unique because it has to work the hardest for a casual fan base to invest in the sport.

The biggest issue for hockey is maintaining a continuous quality of play. Casual fans have a tough time staying with a team when a long season drags on and one game melts into another. Still, many of these audiences arrive primed in April when the pucks drop on the post season. In any game, fans want to see the best plays when the stakes are highest, which is why people naturally gravitate towards playoff hockey– when emotions and athleticism are at its peak. Having a 48 game schedule increases the importance of every single game, meaning the quality of play on a nightly basis will (hopefully) be far superior to the product on the ice for a normal 82 game season. With so few games, teams cannot afford to lose, which puts a premium on gameplay. The better the hockey is the more the casual fan will notice, increasing a wider interest in the sport (and more money in the owner’s pockets). Then when April rolls around and hockey’s relevance is higher than normal, the best players and games shine above in the post season, in an exhilarating march towards the Stanley Cup.

Aside from losing the Winter Classic, the lockout did cost hockey’s faithful the quantity of games, but in return it yielded consistent excitement on a nightly basis. Instead of a normal season where anticipation is high for opening night, before dwindling from November through February, people get to see their favorite players three times a week from now until the playoffs, with a swirling enthusiasm of a playoff push for an entire season.

Following the 2004-2005 lockout, which claimed an entire season, the NHL changed the rules of the game to better benefit fan entertainment. The league ended ties, added shootouts and allowed two line passes, to create a more exciting brand of hockey that always resulted in a decided contest. This time around, the league didn’t need to make a single change to the product on the ice. All along, the only thing the league needed to do was start playing. The game is already so riveting that as soon as the referees emerge from the tunnels Saturday Night, arenas all over North America will erupt in a booming roar, as if their game had never left.