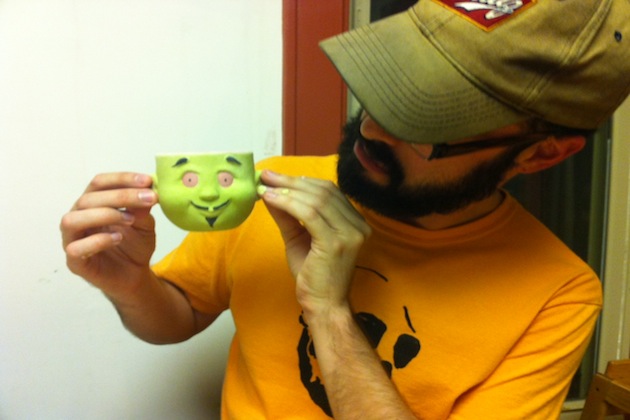 I sat down with AJ Honore, General Manager of KRUI Radio, meeting him for the second time in my life.

Under a bushy black beard, short hair, and thick specs AJ looks as inconspicuous in passing as the next guy. But when he talks, he has a way of subtly commanding attention.

“I oversee everything at KRUI,” he said. This includes all the departments that make KRUI tick – such as music, KRUI.FM, and programming.

At times pensive and at other times utterly direct, AJ told me about how he arrived at the life he has now.

A graduate student working on his second master’s degree, AJ says being a student has helped him learn more than just course concepts.

Over the course of his career, AJ has learned much about himself.

AJ had humble beginnings of the sort that many students have when they step up to the plate for their first year of college.

“Coming out of high school I was majoring in nuclear engineering at the University of Wisconsin in Madison,” he said. “Then I realized it wasn’t for me and switched to political science and, later on, liberal arts.”

By his sophomore year of college, AJ was working at UW’s radio station and soon enough had obtained the manager position there.

Throughout all his life AJ said he has just been riding the wave – nothing too hard in his life worth complaining about.

“I think the most challenging thing is yet to come,” he said.

As AJ continues to pursue his studies, he acknowledges that the most valuable thing he has learned has been the need to keep learning.

“You should always be learning,” he said. “I’ll never have life all figured out.”

In the ever changing currents of a student’s life, AJ seems to have found his own niche where most of us would be uncomfortable.

“I learned from my parents that you need to do what you love,” AJ said.

And, though a ways away from settling on a definite choice, AJ takes comfort and even joy in the search to figure himself out, content with no immediate answers.

“You have to be comfortable with ambiguity because life is always changing,” he said.