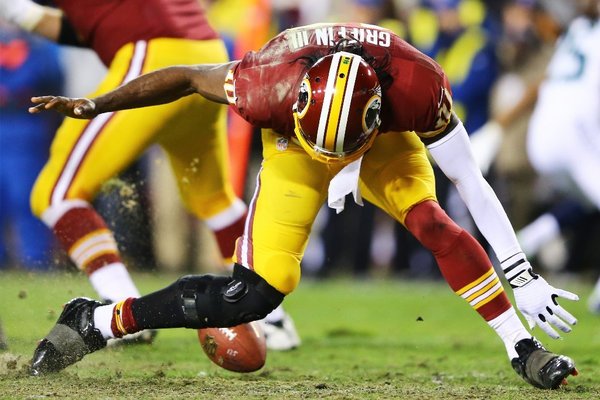 It was easy to tell from a seat in FedEx Field, the bar stool at Buffalo Wild Wings, or the couch at home, that Robert Griffin III was struggling during the Redskins loss to the Seahawks last week. RGIII’s knee injury began in the beginning of December with a win over the Ravens and ended with him being helped off the field in the fourth quarter versus the Seahawks.

It is possible that in the wake of the game, the injury, and surgery of one of the most amazing performances the NFL has seen by a rookie quarterback, there can be reflection on how the charisma of the star athlete can take over the minds of the fans and even the coaches. The image of the player gritting his teeth and “rubbing some dirt on it” is ingrained in the minds of those watching, but can have serious consequences.

Junior Seau’s son, Tyler, and ex-wife, Gina, told ABC News and ESPN that Seau has joined the 50 other fallen NFL players that we know of that suffered from chronic brain damage as a result of continuous hits to the head during the years of playing football.

It was confirmed last week that Seau, one of the greatest linebackers in NFL history, suffered from chronic traumatic encephalopathy.  This neurodegenerative disease has been making headlines the past few years because of its reoccurring trend in NFL player’s brains. It causes dementia, depression, and memory loss.

It is heartbreaking to watch the interview with Seau’s surviving family, and surviving is exactly what they are doing. Tyler talks about how the games his father lived for might have cut short his life. Living with that thought will make understanding that much harder.

Fans love to watch the Cinderella story. Fans love to watch the hero go out onto the field on one leg and win the game with a Hail Mary throw towards the field goal for a touchdown. Fans enjoy being irrational, that’s what makes them so great. But in some cases, the razzle dazzle that is called upon the players ends up hurting them in the long run.

Calvin Johnson of the Detroit Lions stated earlier this year that concussions are part of the job being a football player. There are a lot of jobs that cause negative effects later in life; mining, being a fire fighter, motor cross.