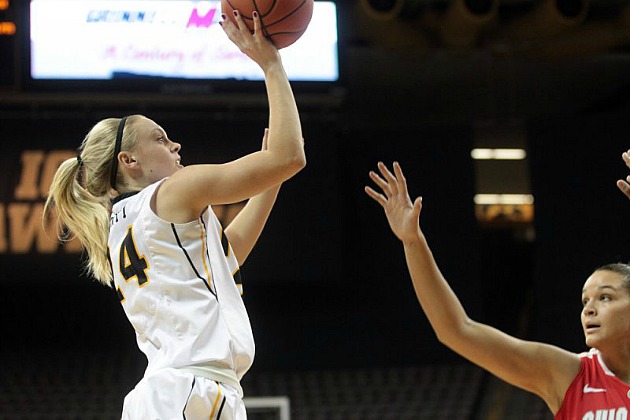 Offensively, Tayler Hill of 24th-ranked Ohio State can do it all for head coach Jim Foster and her Buckeye peers.  Coming into Thursday night’s game against Iowa at Carver-Hawkeye Arena, Hill, a senior guard from Minneapolis, scored in double figures in 47 consecutive games.  Make that 48 consecutive after Thursday night–with a career-high 34 points.

With an outpouring of points like Hill’s, how could the Buckeyes lose?  Well, they did.  To a team of veterans and young guns alike.  At Carver-Hawkeye on a bitterly cold Thursday night, Iowa showed that it takes more than one great player to beat a solid cast executing in front of a small, yet raucous crowd in a 77-71 overtime win.

Hill can do many things for Ohio State (10-4 overall, 0-1 Big).  She displayed that Thursday night, hitting deep threes, layups, and getting to the charity stripe (she was 8-for-8 from the line).  But a team can only go as far as its supporting cast takes it.  Unfortunately for Ohio State, four of the Buckeyes’ starters combined for only 17 points.  Thirty-four points sounds great, but there’s no doubt Hill and her teammates would have taken a win in both teams’ Big Ten opener.

Iowa (12-3 overall, 1-0 Big Ten), meanwhile, wrote a different story for itself.  Four starters scored 14 points or more, led by oft-injured junior guard Theairra Taylor’s 19 points.  And it isn’t just remarkable that four starters scored in a such a way–it was how and when they scored that made Iowa’s overtime victory so satisfying.

Take senior center and All-America candidate Morgan Johnson.  She had another monstrous game for Iowa (16 points, 12 rebounds), but scored 4 of the team’s first eight points to give her teammates and fans an early boost of confidence.  Midway through the second half, Johnson’s six points in a two and a half minute span helped Iowa gain its biggest lead of the game–55-42 with a hair under ten minutes to play.  And with Tayler Hill single-handedly pushing the Buckeyes back into the game with a chance to win in the final ten minutes (Iowa trailed 63-61 with twenty seconds left after Hill scored five points in a late 7-0 Buckeye run), Johnson drew a foul and dropped two critical free-throws to force overtime.

In that overtime, Iowa’s collective assault overtook the Buckeyes.  Theairra Taylor–who has had multiple knee surgeries in her previous years at Iowa before unleashing a career-high 19–scored Iowa’s first six points off four free-throws and a layup.  Later, after Ohio State’s Darryce Moore hit a single free-throw to cut Iowa’s lead to three, 71-68, senior guard Jaime Printy (14 points) drove like a go-cart to the basket for a layup with 46 seconds left–possibly the most significant Hawkeye basket in overtime.  It gave Iowa a two-posession lead in the extra session’s waning moments.  Finally, sophomore guard Sam Logic (17 points, 8 assists, 6 rebounds) iced the win with four points off four free-throw attempts in the final 37 seconds.

With the win, Iowa started its Big Ten schedule the way any team would–with a gritty victory against a good opponent.  Iowa now has four wins over ranked teams in this short season.  Head coach Lisa Bluder doesn’t have a Tayler Hill, but she’s got a crew of women that can lift each other when need be.  And even though Bluder has regularly taken her teams to the NCAA tournament, this team–led by the 6’5” Johnson–may be her most special.