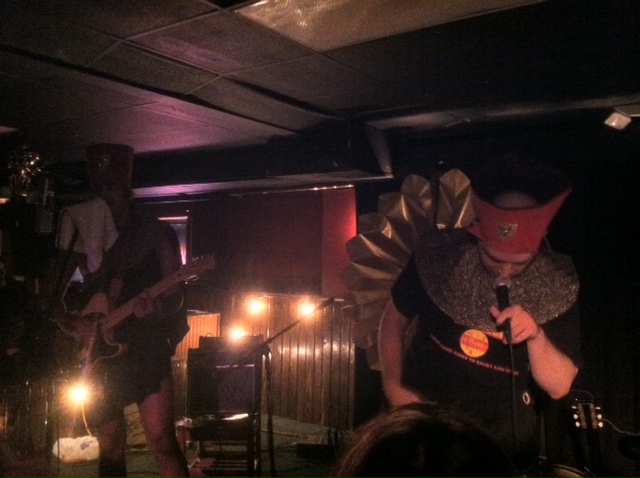 It’s hard for words to do justice to the live experience King Khan and the BBQ Show put on. Let’s just say the nutty, energetic sets are best experienced a few feet from stage where the scent of sweat and beer permeates. On November 29th the Mill was the place to experience live music. Iowa City band Rusty Buckets lifted the night off with their blend of howling, grungy garage rock. From the get-go, Rusty Buckets provoked concert-goers with their sludgy riffs. The Mill was rapidly filling and many were already there enjoying the strong set the duo put on. Dancing was encouraged.

Samuel Locke Ward and the Garbage Boys soon followed with their concoction of rough and melodic rock. The crowd was obviously very familiar with the hometown band and the love of the show was mutual. The Mill was nearly full and the music rollicked on late into the night. Grandiose was the word that came to mind after Ward claimed, “This next one is a song for your job!” The concept of jobs and bosses seemed to be a motif throughout the night, but no one seemed to care that it was a Thursday. Ward and friends let the city know that anytime is the right time to slip away for a while. The instrumentals soared and for a while it was nice to be lost in the sound. They finished their set with the claim that the last song was “one for Mom.” She would have been proud; the crowd drank it in and everyone was eager for the next act.

King Khan and the BBQ Show crept onto the stage, which was adorned with a large golden ornament. They were dressed to impress: headdresses, skirts, neck pieces—this stuff is difficult to describe. The duo plugged in and moshing soon ensued, one might call it aggressive dancing but that seems too kind. They chugged out their brew of punk-y garage rockabilly and it was met with hospitable shouting and sing-along. It’s safe to say the crowd was beyond satisfied. Favorites like “Treat Me Like a Dog,” “Tastebuds,” and “Why Don’t You Lie” were all played ecstatically. Between songs a little crowd and band banter peppered the experience, “Tell your boss you hate him” sticks out in the mind. The environment was playful and it became apparent throughout the night that this was not a show one should miss. King Khan and the BBQ Show were damn glad to be back in Iowa City and they showed it. After their set they had no time to leave the stage because they were so quickly coerced into playing a few more songs.

Their live show is made to impress and it did more than just that. Let’s put it this way, if you weren’t at the show on Thursday you need to find yourself a way to make it next time around. The energy, excitement, and atmosphere of the show were all things the Iowa City concert scene has craved. Do yourself a favor and become familiar with these bands, you’ll be happy you did.