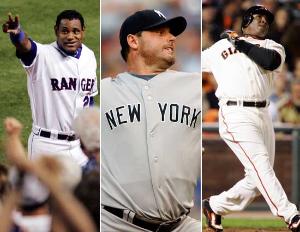 For the first time, Barry Bonds, Sammy Sosa, and Roger Clemens are on the Hall of Fame ballot and this will without a doubt be the most interesting ballot since the first year Pete Rose was on it.

As I’m sure we all know, Bonds, Sosa, and Clemens were big faces during the best legal steroids era. I will focus on Bonds and Sosa.  Bonds had the most alarming situation in my eyes. I mean, just look at his baseball cards.  This guy was a lean player who was actually very good before he started abusing drugs to gain more of an advantage. Why he wanted that advantage is beyond me.  Bonds’ hands, head, arms, legs, you name it, all got bigger in a very short amount of time.

This guy was consistently hitting 25+ home runs and stealing 30-35+ bases.  This begs the question, why would he do this?  The only thing I can think of off the top of my head is the fact that he saw Sosa and McGwire start to hit 50-60 home runs a year and he wanted in on that.  It led to the 73 home run outburst in 2001.  If you look  at his numbers, they are ridiculous, from his home run totals to his OBP. It’s astonishing.

There is no doubt in my mind that Barry Bonds pre-steroids is a Hall of Famer. Unfortunately, though, that is all overshadowed by Barry Bonds the liar and cheater. Personally, I would leave Barry Bonds out of the Hall of Fame.

Sammy Sosa is a guy that, when I was growing up, was adored by many Cub fans including me. I don’t think Sosa’s situation is as alarming in terms of body growth as Bonds’ was, but we definitely saw a leap in numbers.  Sosa hit 50+ home runs for five straight seasons.  This was weird, right?  Sosa was a great hitter, there is no doubt about that, but suddenly he became a phenomenal hitter within just one season. Yeah…

He went from a 36 home run and 119  RBI season,  which is pretty normal for great hitters, to a 66 home run and 158 RBI season.  That’s quite the leap.  Well, maybe people thought, okay, it was just a fluke and he had a great year, but then the following year he put up 63 and 141.  Something had to be wrong.  He kept up that pace for a couple more years.  Sosa is a hitter who also was found to be corking his bats during this time.  I would also leave Sosa out of the Hall of Fame.

Now I bet you’re thinking, who would I give my vote too?  As I look up and down the list of guys able to be voted into the Hall of Fame, the name that pops out to me is Craig Biggio.  Biggio is a player that to me, did it right.  He played for the Houston Astros for his entire 19 year career.  He ended his career with 3,060 hits, had five seasons in which he stole more than 30 bases, and in 1998 he stole 50.  Biggio had an all-time fielding percentage of .985 and was part of the 2005 team that made an appearance in the World Series.

I think the main thing that separates Biggio from Sosa and Bonds was that he played the game clean and fair, remaining steroid free throughout.  That’s somebody that I want my child looking up to and admiring, not someone who cheated their way to the top.