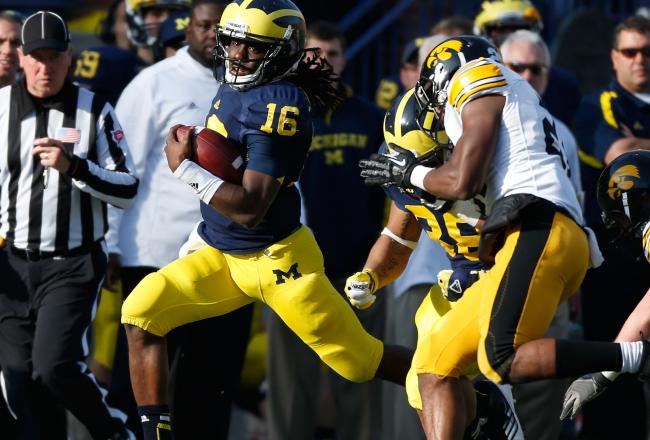 The Michigan offense looked virtually unstoppable on their first six possessions of the game in Ann Arbor on Saturday, scoring on every single one of them.  Denard Robinson was the main focus for all Michigan fans as Saturday was senior day and he has been beloved here ever since he stepped on campus when he was a freshman.

Denard started the game at quarterback, but only played about three or four plays before Devin Gardner took over and take over is exactly what Gardner did.  He accounted for all six of Michigan’s touchdowns, throwing for three and rushing for three as well.  Robinson was the leading rusher for the Wolverines as he lined up at tailed back quite a bit.  Robinson carried the ball 13 times for 98 yards.

Gardner finished up his day 18/23 for 314 yards, three touchdowns and one interception coming in the fourth quarter.  He carried the ball nine times for 37 yards and three touchdowns.

For Iowa it was a struggle to get off the field on third down and Michigan even converted on two fourth down attempts as well, both of them being Gardner touchdown runs.  A couple bright spots for the Hawkeyes came late in the first quarter when James Vandenberg found Henry Krieger Coble down the middle of the field for the touchdown tying the game at seven and then late in the game when Micah Hyde intercepted Devin Gardner.

Iowa’s defense played tired for most of the second half as the offense went three and out on three straight possessions.  Even with the return of Mark Weisman at tailback the offense struggled a bit, amassing only 309 yards compared to the 513 for Michigan.  Iowa won the turnover battle, but was unable to contain Michigan’s offense throughout most of the day.

Fitzgerald Toussaint, Michigan’s star running back left the game mid-way through the first quarter with an apparent ankle injury, but his condition is said to be “good.”  Hopefully he is able to return for the Wolverines as they take on undefeated Ohio State next week in Columbus, while the Hawkeyes return home for senior day on Black Friday to take on Nebraska.