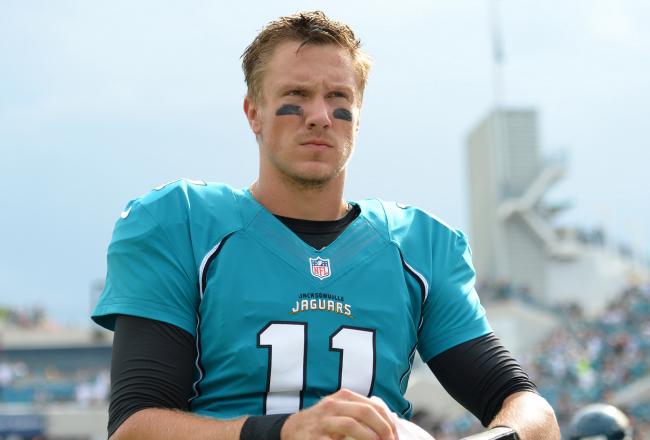 It was the April rookie draft for college players moving to the National Football League (NFL) in 2011 when he heard his name called. For Blaine Gabbert a 21-year-old quarterback out of the University of Missouri it was a big day, a day where he knew he would be drafted by an NFL team and given the opportunity of a lifetime. That opportunity: to play quarterback in the NFL. Gabbert recieved that opportunity when he was selected 10th overall in the draft by the Jacksonville Jaguars. The Jaguars took Gabbert with the hope that he would blossom into the next great quarterback and ultimately lead the Jaguars to a Super Bowl or two.

However after a dismal rookie campaign where Gabbert showed very little progress, produced very little, and showed horrifying pocket awareness it seemed as though the Jaguars had made a mistake.

Now in year two of  young Gabbert’s career, the Jaguars have done all that they can to help the now 23-year-old quarterback become what they wanted him to be when they took him with the number 10 overall pick. The Jaguars went out and hired a new head coach in Mike Mularkey, signed a high-priced wide receiver in Laurent Robinson, and Drafted the two-time Biletnikoff award winning wide receiver in Justin Blackmon to help surround Gabbert with the talent and leadership he needs to succeed.

Since then the Jaguars are 1-8 this season and many people are giving up on Gabbert saying that he will never be what the team wanted him to be when they drafted him last season. While other fans are calling for backup Chad Henne to start the rest of the season, I say don’t give up just yet. Last season Gabbert became one of the youngest quarterbacks to start 14 games in the NFL. Also last season ball security wasn’t a strong point in Gabbert’s game, throwing 11 interceptions and fumbling 14 times losing five of those fumbles.

This season without the help of Maurice Jones-Drew to keep the running game strong Gabbert has all of the sudden become the man expected to take over and win games for the Jaguars. So far with a 1-8 record he has not stepped up quite as hoped however he has played well enough to keep the Jaguars in some of their games where things out of Gabbert’s control ultimately lost them the games. So far this year, Gabbert has shown some progress in the passing game when his receivers are on the same page as him and has also has been securing the ball alot better this season only having thrown six interceptions and fumbled four times through nine games.

Gabbert is still a young quarterback playing in the most difficult league in the world and although he has not taken a huge step forward in becoming the next elite quarterback. I think that we should not give up on him just yet, he is still young and talented and he has shown some progress thus far, and now with receiver Laurent Robinson coming back from an injury, maybe the young and inexperienced group can find a way to get on the same page with each other in these last seven games and show the league why we should not give up on the kid just yet.