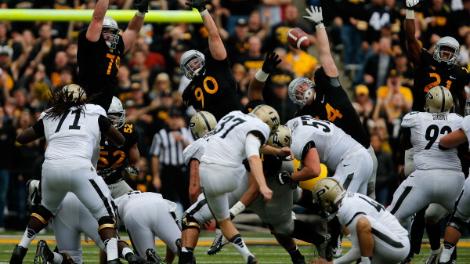 As a 46-yard field goal from Purdue kicker Paul Griggs sailed through the uprights to end Saturday’s game, it seemed that the air was sucked out of Kinnick Stadium as Iowa lost to Purdue, 27-24.

It was the first time Purdue has won at Iowa in 20 years.

The game was a struggle from the beginning for the Hawkeyes, but the moment of truth came when the choice had to be made: go for the fourth down, or try for a field goal into the wind.  Iowa took a risk and went for the first down unsuccessfully, which gave Purdue the opportunity to surprise even themselves.

Iowa dropped multiple passes and made lazy tackles. With few lucky breaks, it was not enough for Iowa to come out on top. They were able to stay in the game via three fumbles by Purdue. Still, Iowa was outgained by 226 yards.

There was a glimmer of hope in the third quarter, as Micah Hyde recovered a fumble from Purdue quarterback Robert Marve and scored a 9-yard touchdown to make the score 24-21 Purdue. The crowd was immediately on their feet chanting “Let’s go Hawks!”

But the light at the end of the tunnel quickly diminished.

With 3:32 left in the fourth quarter, Iowa’s Mike Meyer tied up the game with a 24-yard field goal.  Soon after, Purdue pushed down the field and answered with the winning field goal in just 16 seconds.

James Vandenberg had 190 yards passing and one touchdown for Iowa. Marve threw for 266 yards and scored two touchdowns for Purdue.

The Hawkeyes have now lost four games by three points or less this season.

The win kept the Boilermakers in bowl contention, as Purdue will need wins over Illinois and Indiana to qualify for a bowl game. For Iowa to also have a chance in the postseason, they must win their next two games against Michigan and Nebraska.