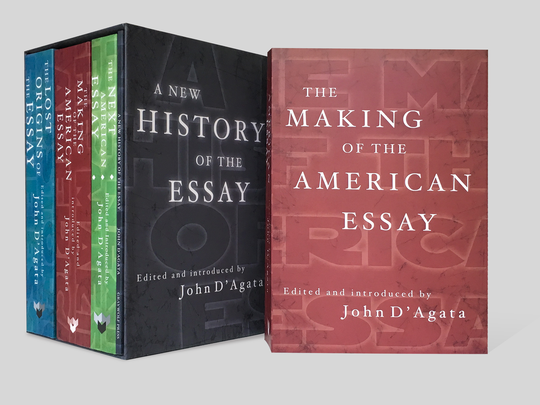 On Saturday afternoon I was able to attend “A New History of the Essay” which encompassed readings by the legend himself John D’Agata and a few of his colleagues including Richard Preston, Kerry Howley, Charles D’Ambrosio, and Inara Verzemnieks.

Many may know D’Agata from his books “Halls of Fame,” “About A Mountain” and most importantly, the trilogy of essay anthologies: “A New History of the Essay,” where you can find The Next American Essay (2003), The Lost Origins of the Essay (2009) and The Making of the American Essay. He is also currently the Director of the Nonfiction Writing Program here at the University of Iowa.

I had never been to Prairie Lights Bookstore before but knew of how well respected it was by the Iowa City community. I was very much surprised to arrive when the door opened at 11:30 am to find that almost all the seats were taken. Ten minutes before the readings were supposed to begin it was standing room only, and even then people will sill cramming in.

Another aspect that caught me off guard was how wide of a demographic that showed up. There were groups of students studying English here at U of I but there were also many senior citizens that had made it to the scene and even grabbed the first few rows!

After an introduction from a Mission Creek staff member, John D’Agata took the podium and read an excerpt from one of his favorite essays about Ansel Adams and the birth, life, and death of a photograph. John described how throughout the essays a common theme is taking reality and shaping it how an author feels and gifting the reader that experience.

Following the main act was Richard Preston who read aloud an excerpt from EB White’s One More to Lake. Before he started, he gave a reader’s discretion to the audience that he was going to compare non-fiction writers to rats. Now of course, I was confused. I’m not an English major and did not understand the comparison he was trying to make but apparently I was the only one who felt this way because

everyone erupted in laughter after he said that.

He went on in detail to say that writing non-fiction is an infinite maze and the writer is the rat in this labyrinth. As a rat spends months and years in this labyrinth finding new passages and opportunities to explore, so does a non-fiction writer weaving in and out of new ideas and the creative information they uncover throughout their studies.

Kerry Howley was up next. As she was finding her page to read, she discussed what the anthology of essays meant to her: “these books comprise a community though time.” The English Mailcoach by Thomas De Quincey was her choice of essay. She explained that this essay made it to her top favorites because of how it answers the ridiculous questions in life while also supplying a good laugh along the way.

Fourth was Charles D’Ambrosio who recited In the Fifties written by Leonard Michaels. Throughout his time in the front of the room he compared an earthquake with its cracks and shakes to the trilogy that this whole reading was about. He went on to say, “There is so much to be found in non-fiction that this essay is just a huge fault in the non-fiction world.” In the Fifties was a captivating narrative that lightened the mood receiving a few head nods and chuckles from those who came to the event.

Lastly, was Inara Verzemnieks who is also a professor at the University of Iowa. She took a personal road with what essay to share today, Signified by Susan Steinburg, and told the story how when she was a student this was on her reading list of literary pieces to read and was so inspired that she made it a mandatory

read for her students. She even threw out the fact that one of her students was so touched by the piece that they got a tattoo inspired from the essay and joked that she was excited to see if anyone would leave Prairie Lights and would get one as well.

The reading concluded with a Q & A. During this segment of the event I learned that it took John D’Agata about two decades to compile “A New History of the Essay.” He shared that both the first and second installment took him roughly three years each to put together with the third one coming in around five years total. Of course, add years of editing and perfecting he spent most of his time post-college piled high in these anthologies.

I think something that will stick with me the most was what John D’Agata said at the end: “An Essay doesn’t make a promise. It doesn’t make any guarantees. These essays are fun and intriguing to read because it’s someone’s mind on paper and you get to live that as you read it and see how the author revolves throughout the essay.”

One of the most relatable questions that I thought I would share with you was asked by a older lady asking how to approach the essay as a first time reader. John D’Agata recommended paying attention to the voice, how intimate it can be and the personality that comes to life in each essay. It’s a mind on a page and it can become very personable.

This was my first time ever attending an event hosted by Mission Creek Festival and although I never would have seen myself going to a literary event, I can honestly say I’m excited to go next year and continue to expand my knowledge.

So I leave you with one question: when is the 2017 line up going to be posted? Am I right?