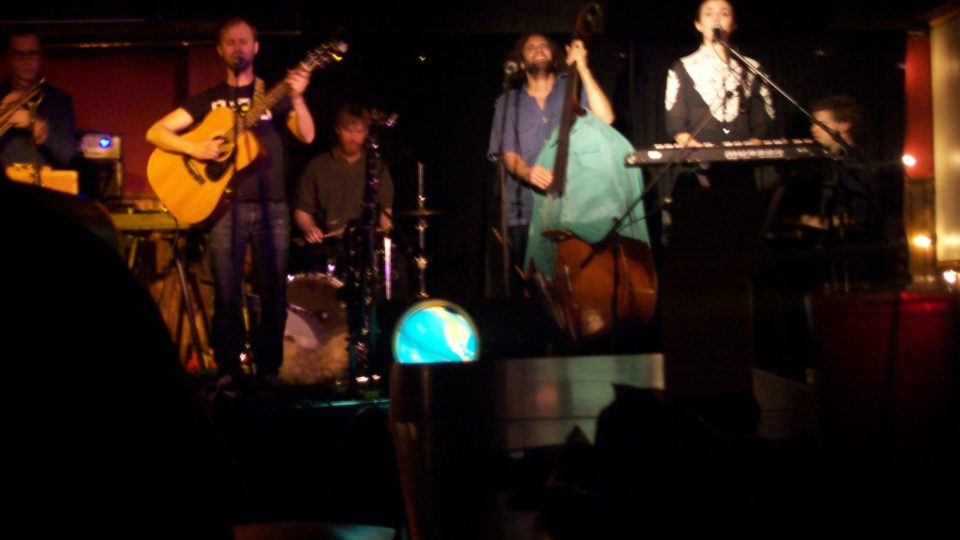 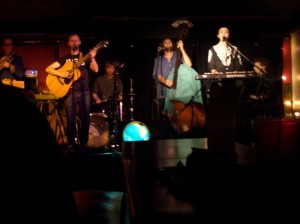 The dulled green lights shone over the wooden tables and floor at the wall last Thursday, November 1, at The Mill. The room slowly filled with a variety of students, citizens, and patrons. As the clock approached 10 PM, the audience began to settle in while six members of Cuddle Magic took the stage.

Five men and one woman make up the group. They are currently on tour with The Daredevil Christopher Wright, with whom they also recently released a split 7” record entitled “A Man of the Arts” together. Cuddle Magic’s mesmerizing sound is comprised of strange melodies, harmonies, and bridges. the band uses multiple guitars, a bass (which happily wears a teal button-down shirt), drums, and bells to create such a style which is reminiscent of the stylings of Vampire Weekend, The Postal Service, and Passion Pit.

After entertaining the audience with a few numbers, including “Expectations,” the band turned it over to the Daredevil Christopher Wright, who took the stage at 11 PM. 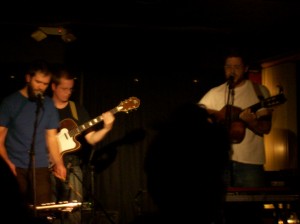 As the three Daredevil men (Jon Sunde, Jason Sunde, and Jesse Edgington) took the stage, they pointed out their Wisconsin heritage but complemented Iowa City. “It’s always a pleasure to play in Iowa City,” Jon Sunde remarked. “I really admire the Iowa Writer’s Workshop.” The group strummed their acoustic and electric guitars and played the drums and the glockenspiel for a solid hour and a half. Such a conglomeration of instruments mixed with the sweet sustaining harmonies of the band members created a phenomenal sound. Similar to Bon Iver and Fleet Foxes, The Daredevil’s style consists of random chords, oohs and aahs, echoes, and whistling. A number of the band’s hits, including “Divorce,” “Ames, IA,” “The Daredevil Christopher Wright,” and “We Fold Inside of Us” captivated the audience for the evening. When the night was finished, the audience insisted upon an encore. The Daredevil consented and played “East Coast.” “Now you’re going to graduate school…” the ensemble sang while a group of students in the corner cheered and waved their arms. By 12:30, the concert wrapped up and the members of both bands milled around The Mill, happy to talk with fans and admirers.