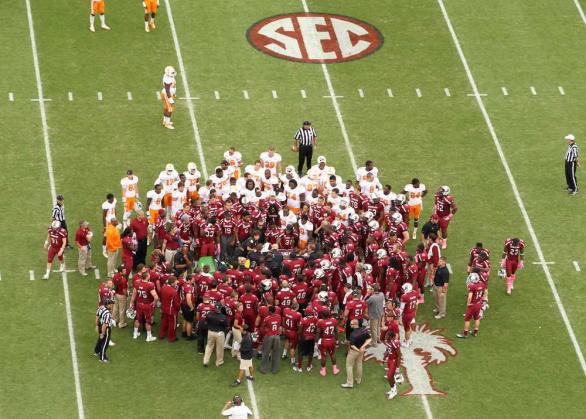 While there is absolutely no doubt that Marcus Lattimore suffered a devastating blow to his right knee in South Carolina’s game against Tennessee on October 27th, an unexpected silver lining of sorts appeared when both the Gamecocks and Volunteers cleared their benches and gathered in the middle of the field to show their support for an extremely talented and promising young running back.

Emotion ran high in William-Brice Stadium as Lattimore’s future in football came into question. His teammates’ heads hung low, his teary-eyed family waited on the sideline for him to be carted into the locker room, and fans from both schools stood speechless. Lattimore placed a towel over his face, obviously overcome with very strong emotion. Video and photographs of the injury after the hit clearly show the pain he must have felt was unimaginable.

Due to the graphic nature of the injury, a link to the video of the hit and a photo of his knee have been posted at the bottom of this article.

Though early reports on 27th stated Lattimore suffered a fracture and dislocated his knee, a statement issued by the team stated that the impact actually caused a hyperextension resulting in severe injury to several ligaments.

While it is obvious his fellow teammates are aware of his skill and potential for success in both college and the NFL, his contribution was also recognized and respected by the opposing Volunteers, a bright spot in an otherwise gloomy moment. As it became clear Lattimore was not going to stand up and walk off the hit, his teammates started to gather around him; Tennessee followed suit. As he left the field, the crowd erupted in cheers and players started to walk back to their sidelines, attempting to compose themselves in order to finish the game.

To see such a heartfelt outpouring of support coming from the opposing team in such a competitive environment was heartwarming, encouraging and a positive sign of mutual respect among college athletes.

So why does this respect seem to all but disappear when players enter the NFL? Athletes leave the NCAA and enter a world where bounty programs are in place and inflicting injuries on the most skilled athletes becomes part of the game. This is not intended as a broad generalization of professional football players or to suggest that they are all being paid to injure fellow athletes, but recent news about teams like the New Orleans Saints has been disheartening to say the least. And in light of players like former wide receiver Cris Carter coming forward to say that they, too, had participated in and initiated similar programs in their NFL careers, it would seem the shocking allegations that came out of New Orleans were not an isolated incident.

What creates the shift from the collegial good sportsmanship that transcends lines of scrimmage to a more cutthroat, almost gladiator-like attitude in athletes as they transition from their college careers to the NFL? Is there added pressure from the coaching staff? When they start making money, does the prospect of making an extra $1,500 make threatening a fellow athlete’s career that much more appealing?

Whatever the reason, NFL players should reflect on the mutual respect they shared as NCAA competitors, take time to remember that every player they face has worked hard to earn their way onto the field, and that effort and talent deserves ongoing respect. Though losing Marcus Lattimore for the season will be difficult for the Gamecocks to overcome, all football players can take away an important lesson from the inspiring display of sportsmanship that followed his devastating injury.