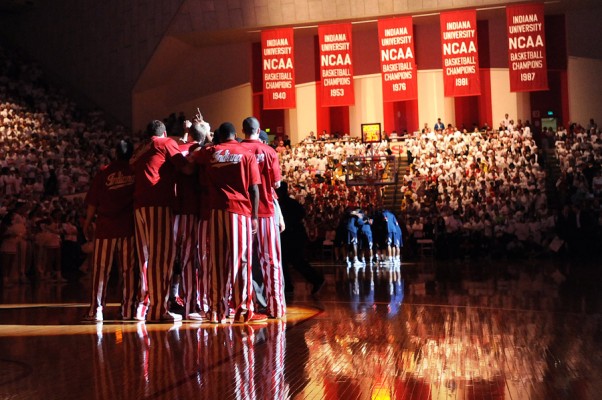 It has been a rough past couple of months for Big 10 football fans with the conference being looked at as arguably the worst among BCS conferences. Michigan set the tone by getting demolished by Alabama 41 to 14 in the first week of the season. The Big 10 has never really recovered from that embarrassing loss and this season seems to be lost for the conference.

Ohio State is the only bright spot for the conference as they are ranked sixth in the country, but of course they cannot compete in the postseason because of the scandal that happened a few years ago. This goes without mentioning that Penn State is also having a good season, but they too cannot participate in the postseason due to a scandal of a different kind.

Along with the bad press that the Big 10 has received, comes the embarrassing performance the conference had in the non-conference portion of the schedule, led by Iowa losing to Central Michigan at home. With all that being said, the midwest can smell basketball season just around the corner, and it could not come sooner.

The Big 10 has three teams in the preseason top five in the nation. Yes that is correct, three teams in the top five. That would be an astounding feat even for the ACC which is usually the top conference in the country. These teams are Indiana at #1, Ohio State at #4, and Michigan at #5.

Rounding out the rest of the top 25, the Big 10 has Michigan State at #14 and Wisonsin at #23. Having this many teams ranked so high to start off the season is a tribute to the kind of hard-nosed, aggressive type of basketball that the Big 10 plays year in and year out.

Sure, the Big 10 usually does not get the McDonald’s All-American 5 star recruits that North Carolina or Kentucky gets, but this could turn out as a blessing in disguise for the conference. For the most part, these recruits do not play college basketball to develop and to stick around for four years to try to win a national championship. These players could have been drafted out of high school if the rules allowed for it and they are simply looking for the program that can boost their draft stock because they know they are leaving in a year for the draft anyway.

The recruits that the Big 10 receives are not as talented as these players, but they are going to stick around for four years and really help develop chemistry that a team needs. The top players in the country year in and year out are freshman that have to be in college. But that does not always mean that they are on the best teams. The Big 10 is experienced with a lot of returning players, and they are ready to make a run at the national championship.

With all that said, by no means does the Big 10 not have talent. Out of the preseason AP All-American team, three out of the six players are from the conference.

With a near unanimous selection, Indiana’s Cody Zeller leads the way for the Big 10. This 7-foot sophomore averaged 15.6 points per game (ppg) as well as 6.6 rebounds per game (rpg) in a stellar freshman campaign. He could have been a lottery pick in last year’s NBA draft but chose to stick around to help win a national championship for the Hoosiers this season.

Trey Burke of Michigan also flirted with the NBA draft last year but along with Zeller, chose to stay in school for another year to lead Michigan’s experienced squad. Burke is one of the top point guards in the country and he averaged 14.8 ppg to go along with 4.6 assists per game (apg).

Rounding out the three is Ohio State’s Deshaun Thomas. The 6’7″ junior averaged 15.9 ppg with 5.4 rpg to lead the loaded Buckeyes last season. Aaron Craft of the Buckeyes was an honorable mention pre-season AP All-American selection as well.

With exhibition games already underway in the conference, the midwest has already started to turn the page on the 2012 football season, to look forward to the basketball season. This could be a year to remember for the conference with so many top teams in the country, but also with the balance that the conference will have with teams like Illinois and Iowa in the middle of the pack.

A true test for the conference will be the ACC-Big 10 Challenge that started off with the ACC dominating but the Big 10 playing better in recent years. Then comes the bruising Big 10 schedule where tough games follow each other every week with these great home court advantages. It should be a very exciting Big 10 basketball season, that will hopefully help us forget about the 2012 football season.