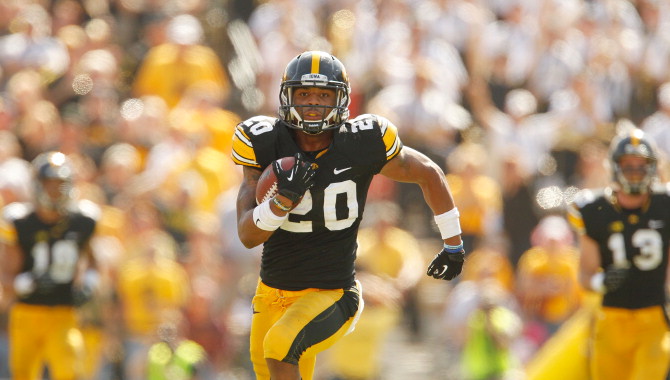 Despite a career day from Christian Kirksey, Indiana quarterback Cameron Coffman and the up-tempo offense proved too much for Iowa, lifting the Hoosiers to a 24-21 victory.

After a 60 minute weather delay pregame, Coffman rebounded nicely after being replaced by freshman Nate Sudfeld on the second drive of the game, finishing 21-33 for 315 yards and three touchdown passes to Cody Latimer, who finished with 113 receiving yards. Fellow receiver Kofi Hughes also contributed 110 yards receiving, including a long of 77.

James Vandenberg finished the game 21-34 for 249 yards, one touchdown and one interception. The offense appeared to be clicking early when Vandenberg marched the Hawkeyes 71 yards on six plays resulting in a 24 yard TD pass to Kevonte Martin Manley. The play marked the first touchdown pass thrown by the Iowa offense since October 20th against Penn State. On the next play for Indiana, Freshman QB Nate Sudfeld’s pass was intercepted and taken 18 yards for a score by LB Christian Kirksey, putting Iowa
ahead 14-0 in the first quarter. Kirksey finished with an interception for a touchdown, a fumble recovery and eight tackles in the losing effort.

After the early offensive outburst, the Iowa passing offense slowed, resulting in 35 passing yards for Vandenberg for the remainder of the half. Iowa’s offensive line, consisting of Nolan MacMillan (first career start),Matt Tobin and true freshmen Austin Blythe and Jordan Walsh, struggled at times getting very little push up front and committing penalties in the first half that hamstringed the Iowa offense.

Iowa falls to 4-5 on the season (2-3 conference), putting their bowl hopes in jeopardy.