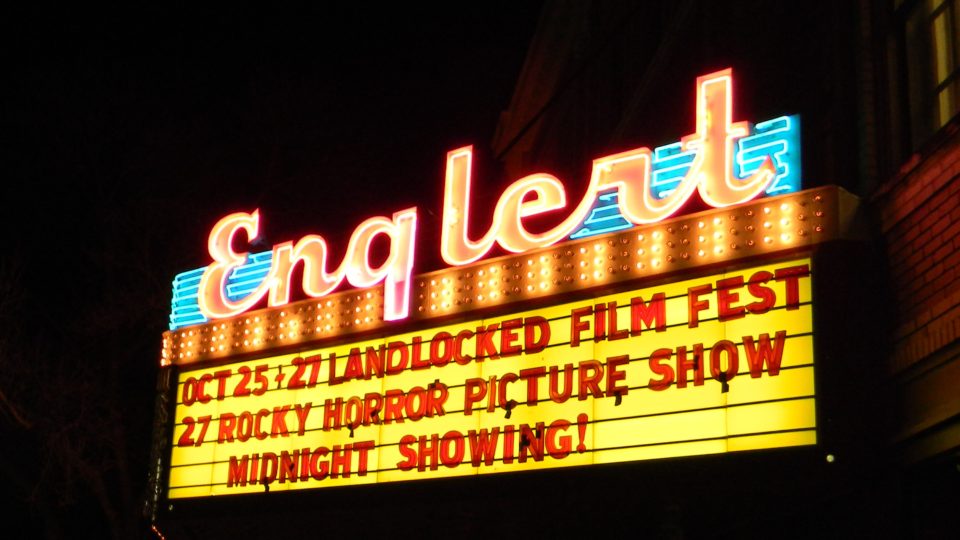 If you were wondering why there were so many guys cross dressing or wearing gold speedos, or girls dressed as maids or in white bras and slip skirts Saturday night, the answer is simply the international cult classic: The Rocky Horror Picture Show.

Just like many did the first time the film was shown at midnight in 1977, viewers lined the street waiting for their goody bags of props and entrance to the show itself. What goody bag of props you ask? When each $16 ticket was purchased at the Englert Theatre, so was a bag filled with props to use during the movie for a more fun and interactive experience. Each bag contained playing cards, a flash light, confetti, a newspaper, latex gloves, bread, a party hat, and a noise maker. All these props were used throughout the film during scenes in which they correlated with.

Now in case you’re not aware, a Rocky Horror midnight screening is not for the meek or shy. Some of the nights events included deflowering the Rocky Horror virgins via the crowd shouting a vulgarity along with throwing their middle fingers their way before the show, a cross dressing Dr. Frank-N-Furter (Tim Curry’s character) running about the crowd during the film, a collective theater dance of the “Time Warp”, confetti throwing, and constant shouting of some colorful words at the screen. It was definitely a unique experience.

Sound like your kind of Saturday night? Well then good news is you’ll have a chance again next year, filled with I’m sure even more lingerie,  lipstick, and good not-so-clean fun. Comics In Action will keep you posted about this annual event.

“Lips! Lips! Lips! Lips!” chanted the audience Saturday night, October 27, at the Englert. Soon enough, the people got what they were waiting for: an enormous pair of bright red lips filled the screen and began to sing Science Fiction/Double Feature. The crowd joined in and eventually the feature film: The Rocky Horror Picture Show, an annual Halloween tradition, had begun.

But before the show could begin, everyone had to wait in the seemingly unending line outside the Englert. Standing out in the cold at 11:45 PM before the midnight showing proved fruitful and entertaining. Before receiving their long-awaited tickets, audience members were greeted by men and women holding tubes of lipstick. “Are you a virgin?” they questioned, referring whether or not each individual had seen “The Rocky Horror Picture Show.” Those who hesitantly answered “yes” had a huge red “V” drawn on their forehead. These Rocky Horror virgins were later asked to come to the front of the stage in order to have a costume contest. Vampires, zombies, skeletons, animals, and even a Brad and a Janet pair paraded up and down the aisles, showing off their fantastic costumes. Those who didn’t wear a costume were not received well. “You’re wearing a coat in Iowa in October?! Who comes here in a coat?” one audience member was asked. The audience cackled and soon enough, the virgins were released and allowed to return to their seats.

The Rocky Horror Picture Show was filled with all of the classic, well-known songs, including Dammit Janet and Touch-a, Touch-a, Touch-a, Touch Me. The mass of audience members stood up to dance and “do the time warp again.” Confetti was thrown. Moviegoers nervously held newspaper over their heads to avoid getting squirted with water. Toast flew through the air. White latex gloves were snapped when Dr. Frank-N-Furter pulled on his gloves. Six golden spandex clad guys, each with a letter written on their chest, ran on stage to spell out “ROCKY!” Performers reenacted scenes from the movie while it ran. Overall, it was an entertaining night for all.

Don’t miss The Rocky Horror Picture Show at the Englert next Halloween – it truly is a crazy and unforgettable experience!