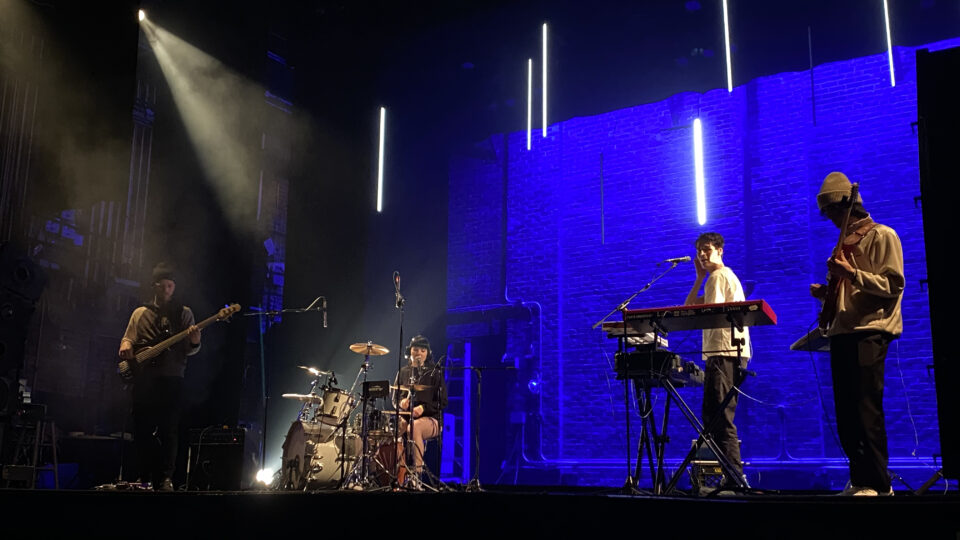 Tennyson’s set started with a bang—literally. A loud, powerful crash to the drum kit brought audience members out of their seats, involuntarily jumping in surprise. The band started at 9:30 with “Feelwitchu,” the lead single from Tennyson’s debut album Rot, released this February.

Tennyson, engineered by artist Luke Pretty, was advertised as a solo act, but the touring band he brought with him seemed like they had been a group act all along. The band featured Luke’s sister Tess Pretty on drums, Beau Diako on guitar, and Akos Forgacs on bass.

After the excited rush of the opening song, the stage went black. Luke thanked the crowd, explaining that the band was on tour and this was their first time playing in a venue “like this,” presumably referring to the Englert Theatre’s size. “It’s nice to have some extra room on stage, to spread out a bit,” Luke said.

The interactive elements made the show fun and inviting, but of course the real highlight was the music. Tennyson’s studio music is very impressive on its own, but the addition of live instruments and acoustics took everything to the next level. Tess, Beau, and Akos all played enthusiastically while Luke delivered raspy, impressive vocals. He occasionally played with autotune, making his voice sound either inhumanly low or inhumanly high.

Luke and his sister Tess were very interactive with the crowd during their set, and Luke’s microphone often picked up his laughter between songs. At one point, Luke asked the band to stop playing just a few seconds after they began a new song. He had forgotten to start the instrumental backing track. “I don’t know, I guess I was spacing out,” Luke said, and the crowd laughed with him.

About halfway through the show, Tess remarked that the band was from Canada. The band, according to Tess, was sure that no place they visited on tour would be colder than Canada. “Is it always this cold in April?” She asked the crowd. “Yes,” the audience replied, their tone conveying a mixture of amusement and frustration with Iowa’s weather.

Tennyson continued with their energetic set, which was a mix of electropop and rock. Luke stopped the band a second time, saying there was an off-key feedback note in his ear that was distracting him. The band took a minute to try to solve the problem, but ultimately Luke waved it off. “I’ll just have to forget about it, I’ll just put it out of my mind,” he said.

If the feedback was causing Luke any issues, he didn’t show it. He was absorbed in his art, rocking back and forth as he sang, eyes closed, fingers perched on his keyboard. He and Tess often smiled at each other mid-performance, reveling in the experience.

They closed the show with audience favorite “Figure Eights,” which veered away from electropop and toward punk rock. Luke upped the vocal distortion, giving himself a brash edge that matched the gritty guitar riffs. Lots of headbanging ensued, both in the audience and onstage.

After their last song, Luke flashed the audience a peace sign and the band left the stage. The crowd continued cheering in their absence, wanting an encore, and the band obliged. They officially closed the night with a vibrant instrumental track.

The band thanked the crowd once again, with Luke hinting that they’d be back. Hopefully, this is not the last time Tennyson visits Iowa City.