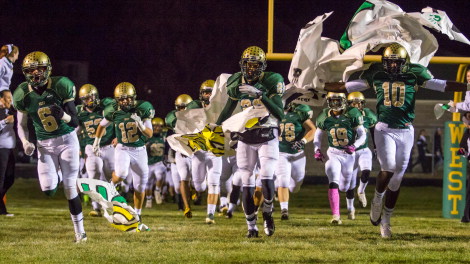 They are ranked second in the state.

They are the Mississippi Division Champions.

They took The Boot from City High after eight years.

They have scored 70 points in a game — twice.

They have scored more points than any team in Mississippi Valley Conference history, and with 265 yards against Waterloo East on Friday, will have more yards.

They are the Iowa City West Trojans.

Led by a confident, first-year field general, a bruising, do-everything tailback, and two towering D-I basketball signees at wideout, the Trojans have steamrolled through the MVC, winning every game by at least 21 points, and by an average of 37 points.

The confident, first-year field general is junior Nate Boland. Boland took over the reigns at QB from now-Iowa State Cyclone Charles Rogers, and he has delivered. With 14 touchdowns to just two interceptions, Boland has led the best offense in MVC history with precision, completing 65.4 percent of his passes.

Of course, he has the aid of handing the ball off to that bruising, do-everything tailback —  Ezra Reiners. Reiners carried the ball just five times in 2011, but became the featured back in 2012. For a team expected by most to be completely reliant on the passing game, Reiners has become a star. Averaging 8.8 yards per carry, Reiners has racked up 807 yards and 11 touchdowns. But his accomplishments don’t end there. He also leads the team with 22 solo tackles, is fourth on the team in catches, and even lofted a perfect 60-yard touchdown pass earlier in the season. Reiners has been led by a wrecking ball  of a fullback in Micah Kelsay, who has become a goal line specialist, scoring 10 touchdowns.

However, every gameplan for the Trojans focuses on the towering D-I basketball signees  — Dondre Alexander and Jeremy Morgan. The 6-3 Alexander, who committed Wednesday to Southern Miss, leads the team with 37 catches and 697 yards. Morgan is the bigger target, literally and figuratively, in the red zone. The 6-6 Morgan has eight touchdown grabs on the season. Morgan doubles as a defensive back with two picks returned for touchdowns, and triples as the team’s kicker, hitting all 24 of his extra points and his only field goal. (Did I forget to mention that West has one field goal on the season?) Reid Bonner adds a third weapon for Boland, but he factors in most in the return game. Two kickoffs and two punts have been returned for scored by Bonner.

Leading tacklers Jessie Peterson and Devaughn McCullogh have led a defense that has come on strong in the past three weeks, allowing seven total points to their two top opponents — City High and Dubuque Senior.

But for the Trojans, making history is no big deal. After all, they’ve done it all season long.