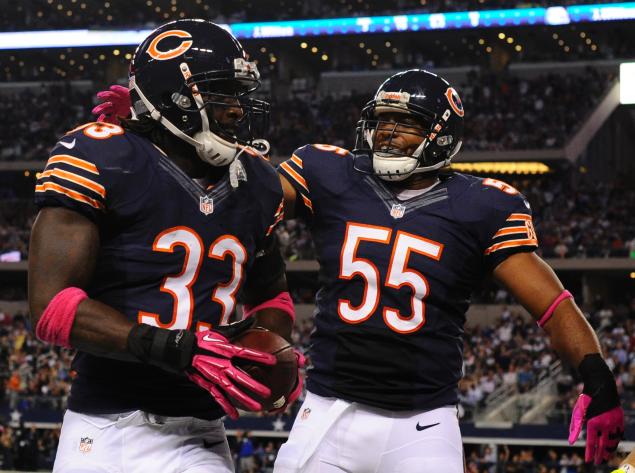 Despite a discouraging Week 2 game against the division rival Green Bay Packers, the Chicago Bears can head into their bye week confident they have put forth a spectacular effort so far in 2012.

Defense: In their first five games this season, they have scored five touchdowns, two in each of the past two games. The Bears currently lead the league with 17 takeaways, 13 of which were interceptions.

Cornerback Charles Tillman was named NFC defensive player of the week after his performance in last Sunday’s game against the Jacksonville Jaguars. He alone has scored two touchdowns in the past two weeks and he now holds the record for the most defensive scores in Bears’ history with eight.

Veteran linebacker Lance Briggs also had a standout game in Jacksonville. He recorded four tackles, a sack, and returned an interception 36 yards for his second touchdown in two weeks, making NFL history with Tillman as the first teammates to return interceptions for touchdowns in two consecutive games.

Adding to the list of impressive defensive play is cornerback Tim Jennings. He has four interceptions and broken up 14 of the 46 passes that have been thrown his way. Jennings is consistently making pivotal plays this season and if he continues to compete at this level, he and Tillman will pose a huge threat to the passing game of even the most skilled quarterback with the possibility of an interception looming with every throw of the football.

Just as he promised before the season began, Brian Urlacher has returned to the field and has not let his post-surgical recovery slow him down. Though he has not reached his full potential, he is expected to build on the 20 tackles he has already made. As one of the captains and veteran players on the team, it’s clear that, in spite of his inability to contribute 100 percent, he is extremely proud of what the Bears have accomplished defensively and one can only imagine how much their play will improve when he is back at full strength.

Offense: Try as he might, Jay Cutler has struggled to keep the ball in the hands of his team in almost every game this season, throwing four interceptions to the Packers alone. He currently has seven interceptions and seven touchdowns, a statistic that needs to improve if the Bears want to maintain their winning record and make a playoff run.

In spite of less than impressive statistics, it seems that he and wide receiver Brandon Marshall have found their groove. In last week’s game, Cutler connected with Marshall for 12 receptions,144 yards, and one touchdown. That brings Marshall to 35 receptions, 496 yards, and three touchdowns on the season, a number that should continue to improve at a steady pace throughout the rest of the season.

After leaving the game in Green Bay with a high ankle sprain, Matt Forte is back and has since had  35 carries for 159 yards. Given the bye week, his ankle should have much-needed, extra time to recover and he is expected to come back healthy when the Bears play the Detroit Lions (1-3) next Sunday at home in Chicago.

Though Devin Hester has great potential and tremendous special teams talent, he has struggled to produce on the offense as a wide receiver for the past two seasons. In 2012, he has just seven receptions for 114 yards and one touchdown. Though he can outrun players and has the ability to make huge plays down the field, he has not yet made any outstanding impact on either offense or special teams.

The excitement that surrounded his rookie season has dissipated and, though it seems unlikely, perhaps the other side of the bye week will bring the return of scoring machine that once stunned sports fans around the nation.

Special Teams: If there is one player that the Chicago Bears have been able to count on for the past few years it is Robbie Gould. This season he has gone 10/10 in field goals, his longest coming from 54 yards out. He has also scored all 17 extra points he has attempted and remains the calm, collected kicker that Bears fans have become accustomed to. If ever a game comes down to a field goal decision, Gould is the man for the job.

Other than Gould’s consistency, the Bears special teams have not stood out as they have in the past. Sorely missed by both special teams and the offense is Johnny Knox, who remains on the physically unable to perform (PUP) list recovering from a season-ending back injury last season. In 2011, he had 15 kickoff returns for 397 yards. Though he is still out as of now and the team is unsure if he will return this season, he is eligible to come off the PUP list following the bye week.

If the Chicago Bears can continue to play as consistently as they have the past three weeks, they should roll over the Lions, Panthers, and Titans in the coming weeks and have the potential to beat the 5-0 Texans in Week 10.