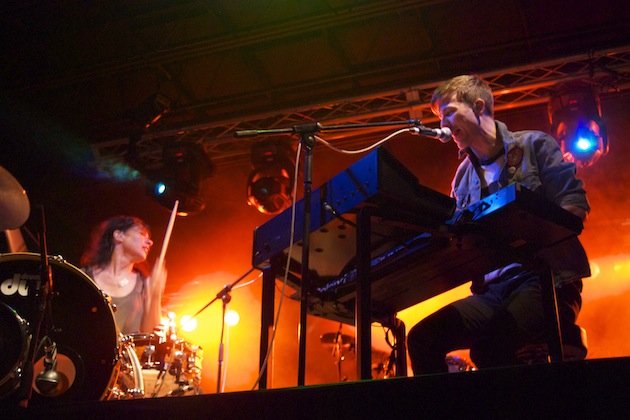 Before Friday night, I had heard only one Matt & Kim song and had never heard of Grand Funk Railroad. As we were waiting for Matt and Kim to take the stage, my friends were describing the vast difference between these two bands. One referred to Grand Funk Railroad as “an 80s hair band my dad showed to me last year.” I laughed off the comment as the long-awaited Brooklyn based duo emerged.

I was pleasantly surprised by the powerful stage presence of Matt & Kim as they opened with “Block After Block” off of their 2010 album, Sidewalks. When they finished the song, a stage hand started fiddling around with Kim’s drum set and she announced to the crowd: “Breaking something on the first song means this is gonna be an awesome set!”

An awesome set it was, composed of selections from their two previous albums, including “Good Ol’ Fashioned Nightmare,” “Good For Great,” “Lessons Learned,” and closed with their most popular tune, “Daylight.” I thoroughly enjoyed every song, and the whole experience felt like one big party.

After Matt & Kim, I ran across the street to get a cupcake before the promised awesomeness of Grand Funk Railroad. By the time I returned, the 18-21 year old crowd had been replaced by men and women in their mid-30s and beyond. As the band opened with their song “Bottle Rocket,” I was immensely entertained by a guy who looked about 70 years old doing the twist a few feet away from me.

Though Grand Funk Railroad is not a band I would normally listen to, I was blown away by the fabulous drum, guitar, and keyboard solos I heard. After they played through “Rock & Roll Soul,” “Footstompin’ Music,” “Shinin’ On,” and “The Loco-Motion,” I was completely hooked on Grand Funk Railroad’s vibe.

Both bands gave wonderful performances, and the concert was an overall fantastic experience. Needless to say, you can now find both names in my iTunes library.

Happy 100th Homecoming to The University of Iowa! To celebrate, Hawkeyes young and old were treated to a very entertaining show as Matt & Kim and Grand Funk Railroad rocked the Pentacrest.

The first act after the adorable Homecoming parade concluded were the rookies, Indie-Pop duo Matt & Kim. Although they have actually been recording since their eponymous debut album in 2006, they are just recently making their way to mainstream audiences, and their fourth studio album, Lightning due out Tuesday, will aid in expanding their evergrowing fanbase.

Matt Johnson & Kim Schifino are known for giving high energy performances, but after witnessing it for myself, this is an understatement. While still playing their instruments (Matt on keyboards and Kim on drums) they would constantly jump and dance to their own tunes, encouraging us to do the same.

They had transformed the concert into a dance party, complete with crowdsurfing and a couple beach balls, but that wasn’t enough for them. At one point Matt threw 100 balloons in the crowd for us to inflate, and later Kim did some impressive crowdsurfing of her own, staying on two feet like a real surfer. The talented and relentlessly energetic duo gave Iowa City a very entertaining show for all, and a pretty decent workout for some.

Next up were the veterans, Grand Funk Railroad. This Bluesy and Groovy Rock band’s tenure dates back to 1969, and the change in crowd was reminiscent of this. Many of the younger viewers, especially girls, had left after Matt & Kim but had been replaced by many parents eager to see if these 60-something year olds still got it.

Although only two founding members remain, drummer/vocalist Don Brewer and bassist Mel Schacher, the band was as sound as ever. They covered all their hits, including “The Loco-Motion,” “Walk Like a Man,” “Some Kind of Wonderful,” “I’m Your Captain,” and of course encored with their anthem “We’re an American Band.” In addition, Brewer performed a killer eight minute drum solo, and guitarist Bruce Kulick did a rendition of our “Star Spangled Banner” that could rival Jimi Hendrix’s.

The combination of Matt & Kim’s dance party plus Grand Funk Railroad’s classic rock show equaled a great way to honor the 100th Hawkeye Homecoming. Good luck to performers next year to top this.