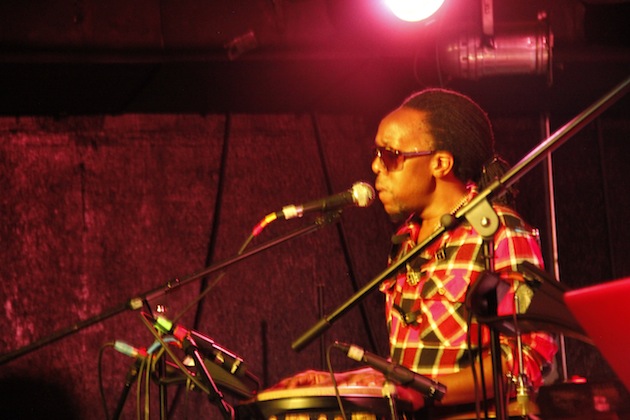 Article and Photos by Christian Craig

2011’s deservedly acclaimed  Black Up was something of an anomaly among rap albums: one part hip-hop head heaven, two parts acid-dripped enlightenment, all laced with beats that bend, crunch, and bleed over a good mix of electronic and acoustic (and sometimes arrhythmic) percussion. These tracks treat conventions as an afterthought, trading verse-chorus structure for that of an inspired daydream and swerving around any chances of comparisons to contemporaries (save for MF Doom and Madlib, but even that’s a stretch). Shabazz Palaces has done a good job of letting the music speak for itself – even after landing album-of-the-year-list spots across the board, the group has a Wikipedia write-up of about fifty words and interviews are far and few between. Before Wednesday night, envisioning how this kind of thing might play out as a live show was tricky.

A Shabazz Palaces show is almost twice as engaging as their debut album and about half as abstract (though not a drop less exciting). Their set was built around favorites from Black Up punctuated with tracks from EP’s and a few that might not have yet surfaced. MC Ishmael Butler and musician Tendai Maraire had almost every move they made choreographed: hand claps at high hat hits, fist-bumps at bass drops, the kind of movements that might have made a cynic groan had everything else been any less organic. Instead, it came off as a bit of reverence, both for the opportunity to make music and for the crowd that came to hear it.

With no DJ present, both members of the group take an active part in creating the music live. Butler’s been quoted as describing Shabazz Palaces’ recorded songs as a kind of launching point for their live shows, and the description is dead-on. Butler and Maraire were able to take tracks exactly where they wanted them to be, whether that meant hanging around the epiphanic chants of “Free Press and Curl” and “…(Felt)” for a few more bars or seeing if “Youlogy” could get any woozier. But juxtaposed with the kind of control and precision demonstrated in the choreography, these jams never got stale and stayed truer to an art show than a Phish show.

Shabazz Palaces packed Gabe’s to about a quarter capacity, though neither side of the stage seemed to notice. It was intimate without artifice, Palaces going as hard as they might to a crowd triple the size, audience as engaged as if they were lucky enough to get so close to the stage. At their last song, Butler and Maraire left the stage to wade through about ten rows of people and were called back for an encore before they could even clear the crowd.