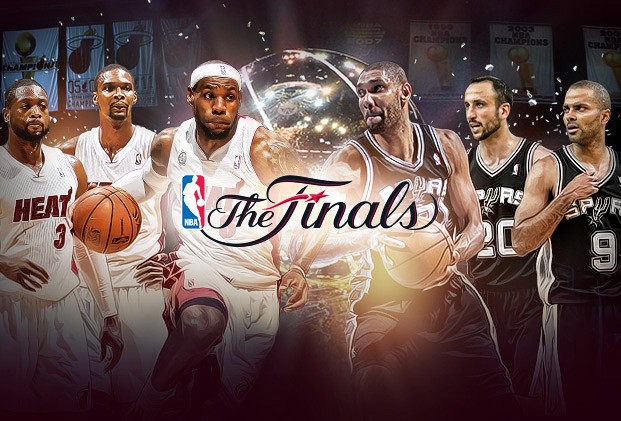 Ladies and gentlemen, I present to you the 2014 NBA Finals representatives.

As we saw last year, the eyes of the basketball world are focused upon the “Big Three” that each team has accumulated much success with.

On one hand, you have seasoned veterans in Tony Parker, Manu Ginóbili, and Tim Duncan who have led the Spurs years of success with a record 111 combined playoff wins as teammates. However, across the court we have semi-newly formed trio of Dwyane Wade, Chris Bosh, and LeBron James who have dominated the NBA by appearing in four straight NBA Finals.

Fast forward to the 2014 NBA Finals and we have a rematch of the 2013 NBA Finals between the San Antonio Spurs and the Miami Heat.

So far, the Heat have made a strong case for their third straight in the 2014 NBA Playoffs.

The Heat have already made their case for a third-straight title.

The first round saw the Heat sweep the Charlotte Bobcats without much trouble (other than a Game 2, 101-97 win). Miami looked to keep their momentum going against the Brooklyn Nets and won the in the conference semi-finals 4 games to 1. Finally, the Heat faced the Indiana Pacers and won in six games to advance to their fourth straight NBA Finals.

The Heat must play through LeBron James. James is averaging 27 points per game and shooting 66% from the field. His style of play is a tough match for the Spurs defense, which found itself in some very strange situations in the 2013 NBA Finals when Tiago Splitter started Game 4 guarding Dwyane Wade.

The biggest question the Heat have is their defense. A lot of Heat wins and losses have been attributed to the play of their defense. At times, the Heat have shown their dominance on the defensive side, but we have also seen the Heat fail to stop teams, especially when they gave up 114 to the Nets in round two of the NBA Playoffs.

A major question for the Spurs is the health of point guard Tony Parker. Parker has been battling ankle issue since Game 4 of the Western Conference Finals. The injury forced him to miss the second half of the Spurs Game 6 win against the Oklahoma City Thunder. Although no player in the NBA Finals is 100% health wise after a grueling season, Parker’s value to the Spurs could be felt for all the wrong reasons if he is unable to step up when it really matters.

With Parker, the Spurs are much better at being able to add that extra pass, which is something their game has thrived upon for years. If the Heat are able to limit Parker, or if Parker is limited by his ankle, expect the Heat to reap the benefits in this series.

The hero of this years NBA Finals for the Miami Heat may once again be Ray Allen. Allen is 11 three-pointers from becoming the all-time finals leader in shots made from long range. If memory serves me right, Ray Allen had a somewhat important game tying three in Game 6 in the Spurs-Heat 2013 Finals.

The Miami Heat do in fact have their work cut out for them, but you can’t deny this team of a championship this year. Will it be easy? No. However, it wasn’t easy last year for the Heat.

The Heat may need a little magic and maybe a little bit of luck as they once again  aim to hoist the Larry O’Brien Championship Trophy for a third straight year.