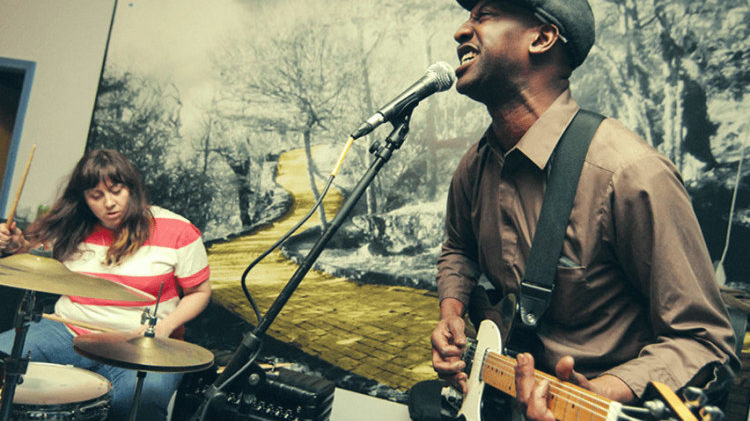 Upon arriving at Gabes the Friday night after Halloween, I had absolutely no idea what to expect out of the show. I walked into a completely empty bar; not a single person sitting down, playing pool, or even hanging out in the beer garden. After getting my wristband, I went upstairs to a nearly empty concert hall. There was a person with a camera filming interviews with the opening act, a few people milling around the bar, and crew setting up the stage.

I sat at the bar and began prepping my notes for when the show started. I noted how close to the start time it was and how desolate the venue was. At 9:50, ten minutes before the show was to start, I counted fourteen people total in the entire room and that was including staff. I began to worry that I somehow got the venues confused, or that the show was drastically later than the website advertised.

The opening act began tuning and setting up onstage and the bar crowd began drifting out and around the stage. Only on very few occasions had I seen a venue look so empty. When the openers kicked into their first song, a fast paced pop punk song in the vein of The Descendents, there were at most thirty people in the entire room. I’ve been to many a show at Gabes, and I have never seen such a small turnout. “We’ve got two more songs, this one’s about cats and the next one’s a Green Day cover,” the singer announced. The set was a tight twenty five minutes of seamlessly flowing tracks reminiscent of some of my favorite bands from high school.

Obnox, the Cleveland based punk act, began setting up their equipment as soon as the other gear was cleared off stage. Going into the show, I was not incredibly familiar with their material. In the past week I had listened through their discography on Bandcamp and found the bulk of their tracks to be completely up my alley. In stage presence, Lamont Thomas and his band took complete command of the crowd. Though the audience had not grown in size, the band had the demeanor and attitude of performing to a crowd of thousands.

The music they began to play was exponentially louder than the opening act. I felt the floor under me shake with every chord strummed and I could feel every drum beat absorbing into my body. In many ways I saw and heard a range of influences, from Gang of Four to the Talking Heads, the band’s energy and audacity hearkened to punk’s definitive legends. The passion and dedication that shone through in their set were rather endearing. The band played a tight set of bombastic punk tracks, each seemingly harder hitting than the last, and the set seemed to be over and done before I could rationalize the experience. I left with my ears ringing and head pounding, exactly what I expect out of a punk show. Obnox played some gripping tracks and put on a stellar performance that transcended the amount of people in the room.