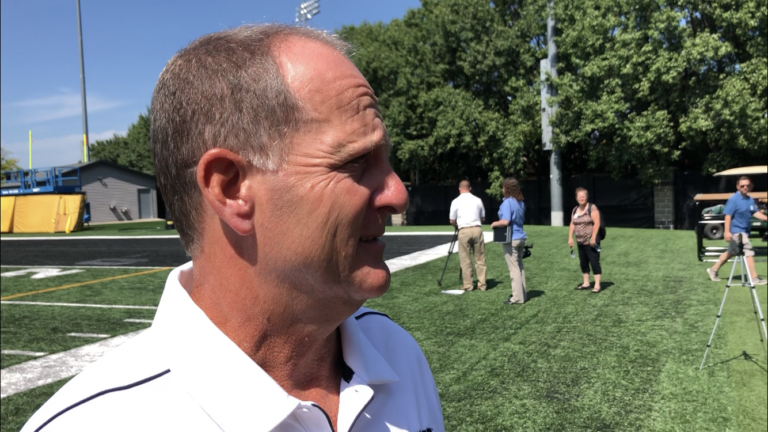 Halfway through the 2018 season, Phil Parker and Kirk Ferentz made the executive decision to switch Iowa’s long-standing, trademark 4-3 defense to a 4-2-5 defense, similar to what teams in pass-happy Big 12 run.

But, as history shows anywhere, a major change in philosophy usually results in growing pains. The initial runs went well against Minnesota, Indiana and Maryland, as they were teams who didn’t possess the firepower to exploit the new look.

That all changed in the Hawkeyes loss to Penn State, which was the first of 3 consecutive losses that dashed Iowa’s hopes of getting to Indianapolis in 2018. These pains happen everywhere, not just Iowa, but it is frustrating nonetheless.

Leading into the 2019 season and with a full off-season to rep and workout the kinks in the defense, head coach Kirk Ferentz feels confident about the new look.

“I think it’s been smooth. It just gets down to a couple things. The personnel of the teams that we play and face, and the world keeps going in the direction of three, four receivers on the field at one time,” Ferentz said. “I think that makes it more of a viable possibility, and then the other factor is how we do.”

Iowa’s inability to adjust to spread teams has been a major criticism of many over the past decade or so. Phil Parker and predecessor Norm Parker believed they’d could keep them contained in the middle of the field, but eventually came to a point where the switch was needed.

However, Parker says there is not much difference between the 4-2-5 and the 4-3 in terms of responsibility and terminology.

“We’re practicing the same, we’re calling the same defenses, it’s just a different guy out there,” Parker said. “We can go all the way back to Christian Kirksey and when he was playing there, he was like the 4-2-5 guy even though he was listed as a linebacker.”

“It doesn’t change my job at all, it actually makes my job a lot easier, actually,” Merriweather said. “Having another defensive back out there that can cover another receiver really helps out the defense as a whole.”

Merriweather is slated in at free safety in the preseason depth chart, the true sophomore saw quite a bit of action on special teams a season ago. Merriweather did note that it would be a big difference not having another linebacker on the field.

“It does make a big difference and some of our calls our little bit different when we have a defensive back out there instead of a linebacker,” Merriweather said. “So that’s been a little bit of an adjustment.”

Hankins and senior captain Michael Ojemudia are listed as the starting cornerbacks with sophomore’s Julius Brents and Ankeny-native Riley Moss as backups. The starters at safety are listed as sophomore Kaevon Merriweather and Geno Stone with the backups listed as senior Devonte Young and Dowling-grad Jack Koerner.